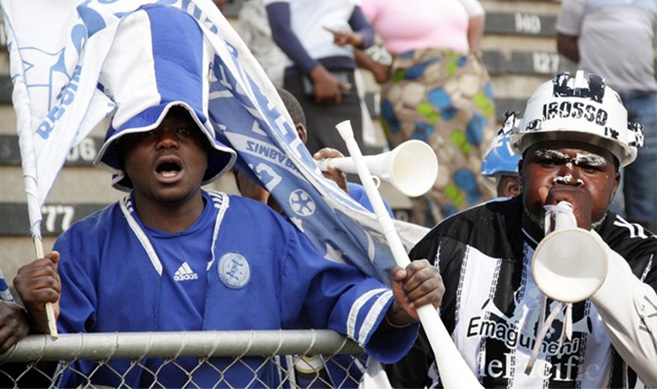 This is the conclusion of Zimbabwean academic Lyton Ncube who spent two years studying the rivalry between DeMbare and Bosso fans as part of his PhD thesis, which focuses on football in Zimbabwe, at the University of KwaZulu-Natal in Durban.

Ncube is a Media and Society Studies Lecturer at the Midlands State University in Gweru.

His academic article, “The Interface between football and ethnic identity discourse in Zimbabwe,” has already been published by the Scotland-based journal, Centre for African Studies.

Ncube embedded himself with Dynamos fans on match days across the country, heard, at close quarters, their songs – in good and bad times – and interviewed them about their rivalry with Highlanders.

He also embedded himself with Highlanders fans across the country on match days across the country, also heard, at close quarters, their songs – in good and bad times, and interviewed some of them about their rivalry with Dynamos.

Ncube also spoke to the club’s officials, interviewing Highlanders chief executive Ndumiso Gumede last year, who has been part of the club for more than 50 years, and also interviewing Dynamos legends, George Shaya and Freddie Mkwesha.

He said Gumede told him that ‘Highlanders is more than a football club but an institution of resistance,’ while Mkwesha told him the Dynamos was a powerful tool against White minority rule and the ‘motivation was to beat the Whites in the game, because they thought they were better than us at soccer.’

He notes that the rivalry between the two clubs is fierce. ‘There is a great rivalry that exists between Dynamos and Highlanders supporters. This rivalry is contested on and off the pitch,’ Ncube notes.

‘Indications are that this rivalry is based on real and perceived historical and contemporary ethnic and regional enmities between Zimbabwe’s two dominant ethnic groups — the Shona and the Ndebele.

‘In Africa, Dynamos and Highlanders’ rivalry is on par with that between Al Ahly and Zamalek in Egypt, and Gor Mahia and AFC Leopards in Kenya.

‘In Europe, it mirrors the rivalry between Celtic and Rangers (Scotland), Real Madrid and Barcelona (Spain) and Manchester United and Liverpool (England).

‘Due to this intense rivalry, Dynamos and Highlanders matches generate much interest among supporters in Zimbabwe and such matches are eagerly awaited.’

Ncube said the notion of “Ndebele royalty” was at the heart of Highlanders during its formative years and the team, having been formed at a time when the Ndebele kingdom had been destroyed by the European settlers, ‘provided people in Bulawayo and Matabeleland provinces a platform to express and preserve their ethnic cultural identity.’

He argues that Highlanders, just like Dynamos, have ‘a complex history entrenched in nationalism and politics of resistance’.

Footballers and administrators that he interviewed told him that Bosso became a critical rallying political point during the nationalist struggle.

The same, says Ncube, is also true for Dynamos, who says Shaya told him that the Glamour Boys provided people with a chance to challenge White supremacy.

‘The supporters took Dynamos as the liberation struggle movement,’ Shaya tells Ncube in an interview.

‘You could sense the tension in the terraces, especially when we played against Callies, a team which was dominated by Whites, it was a political fight.

‘To the fans, Callies, a European team, resembled the Rhodesian Front while Dynamos, an African team, represented ZANU.’

And Mkwesha agrees. ‘The motivation was to beat the Whites in the game because they thought they were better than us at soccer.  We wanted to show them also that as Africans we were also good.’

Ncube then goes into the rivalry between the two giants. ‘Empirical data in this study has revealed that Dynamos and Highlanders are supported along regional as well as ethnic lines,’ he notes.

‘I, however, observed a contradiction to this claim in the fact that Highlanders supporters claim through songs and popular chants that ‘Bosso (Highlanders) itimuyelizwelonke (Highlanders is a team for the nation/everyone).

‘Similarly, some sections of Dynamos FC supporters also openly despise Ndebele speakers yet in their popular slogans they claim Dynamos FC is a team for the “people”.

‘The notion of the “people” becomes mystical in such circumstances.’

Ncube said the hotbeds of the rivalry could be found at Soweto at Barbourfields and Vietnam at Rufaro.

‘While ethnic rivalry manifest at various supporter stands in different stadia in Zimbabwe, Soweto and Vietnam stands at Babourfields Stadium and Rufaro Stadium, respectively, appear to be the leading sites at which this rivalry reaches “boiling” point,’ Ncube notes.

‘Mangezvo states that the stand “Vietnam” was named after Vietnam, a reference to the 1960s war in which the USA suffered its first defeat

‘Not only was Dynamos FC formed around the same time as the war in Vietnam, but also the success of the Vietcong guerrillas against the “mighty” Americans was an inspiration to the Zimbabwean guerrilla struggle that began in 1966.

‘The Vietnam stand is, therefore, a site of resistance against power.  The “Soweto” stand at Babourfields was named after the popular Black township of Soweto which was the hotbed of the anti-apartheid struggle in South Africa (Mangezvo).’