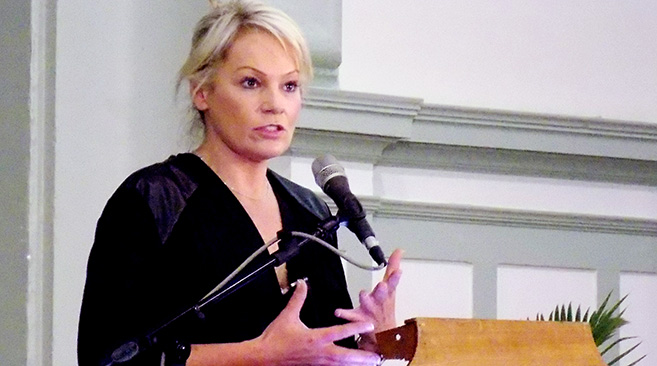 The annual seminar, arranged by the Alan Paton Centre & Struggle Archives to coincide with Heritage Month, has been aimed since 1997 at commemorating the contributions of liberals, like Peter Brown who founded the Liberal Party, to ending apartheid.

La Grange, who played an important role in the life of South Africa’s most revered leader, chose to centre her contribution to the seminar on the wealth of memories she has of Madiba, while acknowledging how he would have smiled upon the event for its remembrance of unsung heroes like Brown who need to be recognised and honoured for their contributions.

La Grange’s presentation, titled “Pursuing your passion”, highlighted some of the most memorable and formative lessons she learnt during her 19 years in Mandela’s employ. La Grange focused on Madiba’s demonstration of three values which guide her outlook on life: to act with courage and conviction, to treat everyone with respect, and to demonstrate discipline in one’s conduct.

La Grange made it clear that her goal in telling her part in the Madiba story was to ensure that the valuable lessons she had the privilege to learn from him are not forgotten.

She described having to find courage upon meeting Mandela to realign her convictions as a young, ignorant Afrikaner girl, and said that the courage and conviction which motivated men like Mandela, Paton and Brown should inspire all South Africans.

La Grange also spoke of the former President’s graciousness and respect in addressing her in her own language when they first met.

Madiba, la Grange said, always acted out of the belief that the way one approached another person would determine how they treated you, and never to allow the enemy to determine the grounds for battle. ‘Even though I could have been considered the enemy,’ said la Grange – who described herself as a one-time conservative racist’ – he didn’t allow me to determine those grounds, and did so by making me feel that I was respected.’

Returning to the third value he taught her, la Grange said Madiba viewed discipline as vital, regarding tardiness as a display of disrespect for another person and their time. ‘He was very meticulous about things like that,’ she said. ‘If someone was late for a meeting, he would leave, even if he had nothing else to do, in order to teach people to be disciplined.’

‘What left a lasting impression on me was how much respect Madiba paid to others, even people who didn’t deserve it … He had a deep sense of self-respect, so much so that he could forgive the enemy, embrace them and turn them into his friends. One can only achieve that with the utmost amount of self-respect.’

‘To honour his heritage,’ she said, ‘we need to apply the lessons we have learnt from him.’

The Seminar, held in the Colin Webb Hall, was well-attended by representatives from numerous sectors, with a group of school learners in attendance, as well as teachers, business people, academics and municipal officials. La Grange’s presentation was met with great enthusiasm, engagement and chuckles at the endearing and thought-provoking anecdotes that reminded guests of the noble, beloved leader.

La Grange referenced John Carlin, author of Playing the Enemy: Nelson Mandela and the Game that Made a Nation, to explain what motivated her to publish her memoir. Carlin told la Grange that she had a bigger obligation to tell her story than what potential criticism could dictate. La Grange stated that Madiba knew her heart, so she knew what would be suitable to place in the public domain, with the rest remaining with her forever.

‘It was important for me to share the person that I knew,’ said la Grange. ‘The biggest compliment people now give me [after reading the book] is that they feel like he is alive and like they now know him. That is what was mine to share with the world.’