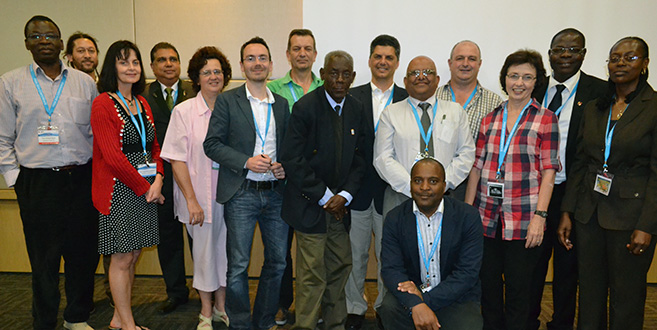 According to Sibiya, oral administration of CHQ evokes adverse effects on glucose homeostasis and kidney function in African children, probably due to high plasma CHQ concentrations.

She said studies indicate that oral administration of amidated-pectin chloroquine beads formulation sustains controlled release of CHQ into the bloodstream.

‘Accordingly, we speculated that CHQ, administered via amidated CHQ-pectin patch, sustains controlled release of CHQ into the bloodstream,’ she said.

Sibiya said these parameters were monitored over a 21-day period divided into pre-treatment, treatment and post-treatment. Transdermal delivery of CHQ and oral CHQ equally reduced P. berghei parasites to undetectable levels by day five of treatment.

‘Interestingly, the once-off topical application of the pectin-CHQ patch increased blood glucose concentrations of P. berghei-infected animals. ‘Furthermore, oral CHQ treatment was associated with increased urinary Na+ outputs and hyperkalaemia in both non-infected and infected rats. The CHQ patch did not influence these parameters.’

She said the study concluded that transdermal CHQ delivery not only delivers CHQ into the systemic circulation, but has the potential to ameliorate the pathophysiological effects associated with oral CHQ treatment.

The aim of her study was to provide insight into the fundamental behavioural and histopathological mechanisms underlying the development and progression of HIV-1 neuropathology.

According to Harricharan, the novel study directly highlights the correlation between hippocampal-associated behavioural changes with histologic alterations following stereotaxic intra-hippocampal administration of Tat protein in rats.

She said the implications of this study may positively impact the fields of immunology and neuroscience by encouraging future researchers to consider novel strategies to understand the complexities of HIV-mediated dementia pathogenesis.

Channa welcomed all delegates, saying his Discipline was proud to host the Conference which drew participants from almost all South African universities as well as those from Namibia, Botswana, Zambia and Nigeria. They ranged from new researchers taking tentative steps at their first research forum to internationally-rated researchers who lead the way in their respective fields.

‘In keeping with one of the strategic initiatives of the PSSA, we have arranged a Young Physiologists Session to follow up on the one last year. We urgently need to expand the participation of our younger members in the affairs of the PSSA,’ he said

He said much introspection, debate and discussion is required pertaining to the future role of Physiology at tertiary institutions, hence the theme for this year’s congress.

In his opening address, PSSA President, Professor Faadiel Essop, said: ‘Our Discipline has had to take something of a back seat during the last few decades.  This may be attributed to two significant developments over the last few decades, namely, molecular biology (the post-DNA helix discovery) and the “omics” eras.  Although the latter includes invaluable techniques such as genomics, proteomics and metabolomics, these two “waves” of developments have unfortunately contributed to Physiologists and physiology as a discipline being increasingly marginalised.’

He said Physiology departments have gradually disappeared, now typically forming part of larger, amalgamated departments. ‘This of course has in some instances resulted in a sense of lost identity and also a feeling of isolation.  This meeting is, however, part of a process of moving Physiology back into the spotlight,’ he added.

According to Essop the meeting provided an ideal setting for Physiologists to stake their claim and showcase how they can help integrate information and thereby help advance knowledge creation within the human life sciences discipline.