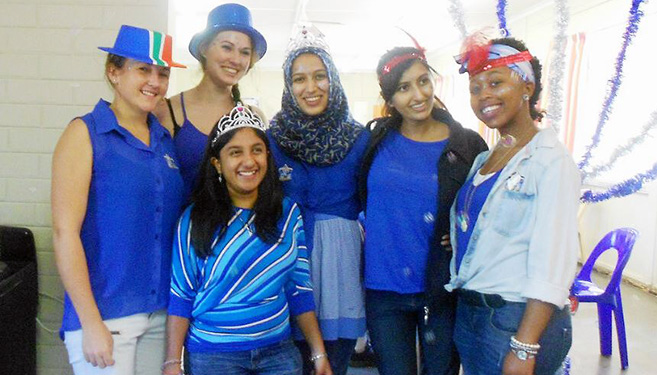 The third-year students – Ms Mookho Makhata, Ms Sanchia Abrams, Ms Tamlyn Wanless, Ms Lauren Felgate, Ms Miksha Jagwanth and Ms Ameera Kakawere – were placed at Challenge Durban North as part of their Psychosocial Theory and Fieldwork module. They seized Casual Day 2014 – a nationally-observed day aimed at raising awareness about disability – as an opportunity to “dazzle for disabilities” and organised a fun-filled party with games, make-up artists and entertainment for all.

It was the 20th birthday edition of this auspicious event. The theme for the day was “Bring out the bling” and the theme colour was “dazzle blue”.

The event was a tremendous success and the students conveyed their thanks to Pick n Pay Hyper by the Sea for donating food, snacks and drinks for the party; Imagination Costumes for lending them the costumes and props; Nadine and Natalie Wessels for putting makeup and smiles on people’s faces; Mixies Cake Decor for its funky and flavourful cupcake supply; MCSR Function Hire (Pty) for the much-enjoyed bubble machine; and Trevoulin for his fantastic videography.

‘This day of awareness, laughter, dancing and all-round fun will not soon be forgotten,’ said Makhata, who said she wanted to make a difference in other people’s lives, especially vulnerable populations, which is why she decided to study Occupational Therapy at UKZN.