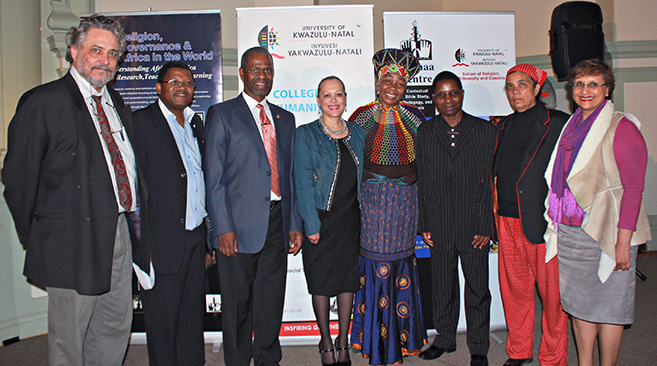 Guest speaker, Dr Gcina Mhlophe, paid homage to and drew from the educational and activist legacy of Nokuthela Dube, the first wife of John Langalibalele Dube.

Mhlophe, an activist, actor, storyteller and poet, delivered her Lecture in both isiZulu and English. The talk was titled: "Writing women, gendering history: what would it mean to look at the 20th anniversary of South Africa’s democracy from the perspective of Nokuthela Dube?"

Deputy Vice-Chancellor and Head of the College of Humanities Professor Cheryl Potgieter welcomed Mhlophe and other esteemed guests who included KZN Health MEC Dr Sibongiseni Dhlomo and the families of both John and Nokuthela Dube.

‘We recognise Nokuthela as a leader, educator, woman and artist in her own right and we honour her contribution to the democracy of South Africa. She represents a generation of South African women and its unsung heroines. As the College of Humanities, we hope to have a series of lectures in the future to acknowledge women leaders like Nokuthela,’ said Potgieter.

With her trademark storytelling flair, Mhlophe entertained the audience with poetry and great anecdotes pertaining to Nokuthela. However, Mhlophe noted that almost 100 years since Nokuthela’s death, very few people knew that she even existed.

‘Why on earth did our history choose to forget this diamond of a woman? Or would it have been better if she had been a man? History needs to sometimes be called HERSTORY too. Otherwise many more women who fought for a better South Africa will be forgotten.’

Mhlophe made reference to journalist and author Bessie Head and Head’s hopes for the future of the country. She went on to engage the audience by calling out names of other women activists who should be remembered, such as Lilian Ngoyi, Fatima Meer, Ruth First and Miriam Makeba.

‘So many people were impacted by Nokuthela’s work,’ she continued. ‘The time has come for us to finally shine a spotlight on her name so that many more will stand up and find ways to celebrate her life. In different artistic expressions, we need to relearn how to not be intimidated by sexism, racism, patriarchy and other chains that continue to tie down African women to this day.’

Mhlophe shared her horror at the brutality and violence still being committed against women, even as the country celebrated Women’s Month in August. ‘The countless freedom fighters who laid down their lives for us must have dreamt of a more balanced and caring nation than this.’

In response to Mhlophe’s lamentation, KZN Health MEC Dr Sibongiseni Dhlomo said that men must take a stand against violence to women. ‘My theory is that if the world is led by women we might see fewer wars, less killings and the spreading of love. We must give respect to women; in light of all that Nokuthela Dube and other great women have done, we must give respect to women: past, present and future.’

Mhlophe also raised the importance of quality education. ‘Arts and education are twins that should never be separated. Our nation would be better off with more focus being given to creative spirits like Nokuthela in joining hands with educationists to build successful young South Africans.’

As a token of appreciation for and in recognition of the efforts of Nokuthela Dube, framed photographs of both John and Nokuthela Dube were handed over to their respective families and to the school principals of the Incwadi and Ejubane schools which were founded by Nokuthela and John Dube in the mid-1890s.