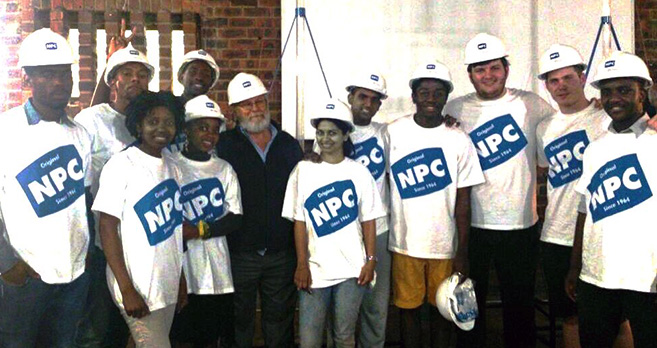 Student teams came carrying their neatly designed Egg Protection Devices (EPDs) made out of concrete, cast one week earlier in their schools’ workshops using materials provided by Natal Portland Cement and constructed according to competition rules and specifications.

Upon arrival, all students received hard hats and T-shirts.  All structures were tested at the venue in front of a crowd of about 60 students, their lecturers, staff members from the sponsor, NPC, and event hosts. A load of 5kg was dropped from a 1.5-metre height and the two structures that withstood the most number of blows won first and second prize. A team from UKZN came first with 60 blows, while second place (35 blows) went to the ever-known-for-winning MUT. The prizes were R1 000 and R750 respectively.

Students also had to cast concrete cubes that were required to reach a strength of 38.7kN after seven days of curing. Laboratory tests on cubes entries were conducted the previous day and winners were announced at the event. Three students, Bandile Sokhulu, Njabulo Madonsela and Johan Smith, all from UKZN, whose cubes strengths were closest to target, earned themselves cash prizes of up to R1 500 each.

The evening ended off with light snacks followed by speeches thanking all those who made the event possible, including encouragement for students to continue working hard to pursue excellence in their careers.

Some of the students who took part said the competition had taught them how to apply their engineering curriculum knowledge to solve real-world problems and to work together as a team. They had also built friendships and were keen to re-enter the following year.

Civil Engineering Professor Phil Everitt who was master of ceremonies said: ‘I never expected my students to win in the way they did; I was just happy that our School was represented, but the results blew my expectations and the highest record of 60 blows set by one of our teams was unprecedented.’

UKZN submitted a maximum number of entries to the competition this year, he said.