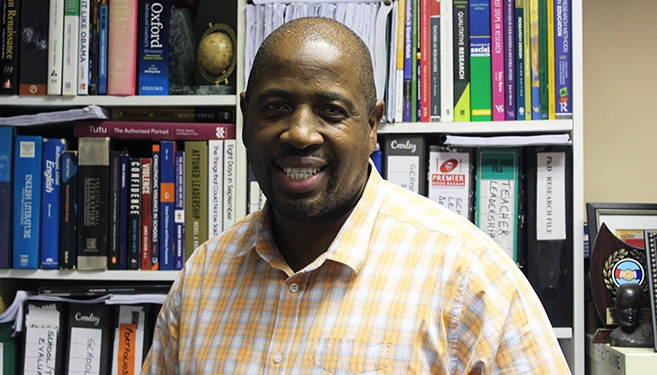 It’s a dreary Thursday morning. The skies have blackened but the rain has held off so far. I am about to meet Dr Siphiwe Mthiyane, a Lecturer in the School of Education at the Edgewood campus in Pinetown. I’m running a little late, due to a truck-filled N3, worried that the former school principal will give me a lashing for my tardiness. But to my surprise, he envelopes me with warmth, flashing a smile that erases any worry.

When we finally start chatting, I realise that it has been a busy year for Mthiyane. He graduated this year with a Doctor of Philosophy degree, supervised seven students who also graduated this year and published more than five academic papers with colleagues. Currently, he is involved in a number of research projects and he also visits high schools regularly to motivate Grade 12 learners ahead of their daunting end-of-year exams.

How does he do it all?

‘I also work with very supportive colleagues. Through their motivation one had no choice but to do one’s work in order to get this [PhD] done. I was never under pressure to do a PhD because the University wanted me to do it … I did it because I wanted to.’

‘I had finished most of the work on my thesis last year but I realised that I couldn’t submit for last year’s graduation. So I did the final touches and waited for examiner reports to come back and I graduated this year,’ he said.

Together with Professor Vitallis Chikoko and Dr Inba Naicker, he is conducting research on school leadership development. The School of Education has a programme called the Advanced Certificate in Education - School Leadership (ACE-SL) aimed at developing serving principals, heads of department and other aspiring school leaders.

‘As researchers we saw this as an opportunity … All over the world there is a feeling that if you develop the leadership of the school, chances are this will rub off on the manner in which the teachers lead, manage and teach the learners in the classroom.

‘We have a new South Africa with new ways of doing things. We are coming from an oppressive,   racist and sexist past. We are now moving into a new era of democracy where even the manner in which we lead, govern and manage our schools has to change. That is what we are teaching our students: the new ways of leading and managing schools which are in line with our Constitution,’ he explained.

Another project Mthiyane is working on is in the area of school decline, school choice and learner demographic changes or migration in desegregated schools in Durban.

‘If you go to township schools, you will still not find White, Coloured or Indian children there, even though officially there is no rule or law which says they cannot attend those schools. I’m not aware of any schools in the townships which has attracted other races. What has happened is that the road has been one-way. Africans are moving to former Coloured, Indian or White schools. But we are also observing that when African, Coloured and Indian learners enrol at these schools, the White learners tend to dwindle. In the community there are still White learners, but they are not attending local schools.’

As part of the research, teachers and principals have been interviewed on their opinions of this phenomenon. ‘Perhaps if we have access to parents later on, we will also want to find out from them where they are sending their children and why are they not sending them to the schools that they themselves attended.

‘It is very interesting because you still find that these schools have largely White principals and teachers, but the majority, if not all the learners, are Black (African, Indian and Coloured). Why are staffrooms not changing in line with the learner demographics? That is what I am researching.

The research will be published early next year, according to Mthiyane.

Before joining UKZN in 2009, Mthiyane was a principal at a school in Inanda for 10 years and he feels strongly about regularly visiting high schools to motivate Grade 12 learners.

‘I go to schools on invitation and I address mainly Grade 12s. I talk to them about a host of things that young people may need to know, especially about graduating from high school to university and the demands of a university. But I also motivate them before they write their trials or end-of-year exams,’ he said.

As someone who always strives for excellence, Mthiyane believes that one needs to work hard to achieve one’s goals.  ‘I’m not sure if I’ve achieved success, but its hard work, sacrifice, planning and commitment. The reverse is also true: lack of commitment, discipline and persistence are major causes of failure. I share these ideas with students whenever I am afforded an opportunity.’