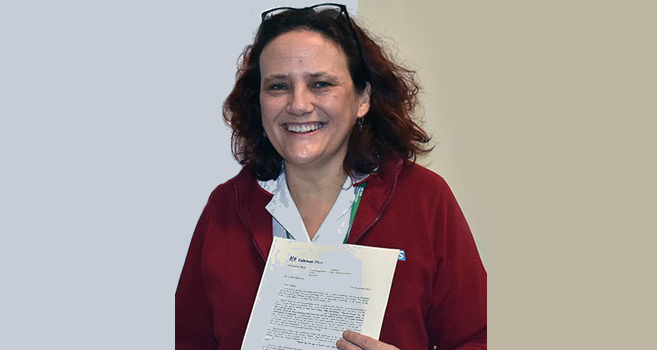 UKZN alumnus and dietician, Mrs Penny Kaye (nee Burns), who will be awarded an MBE from Queen Elizabeth II.

An alumnus of UKZN, Mrs Penny Kaye (née Burns), has been awarded an MBE (Member of the Most Excellent Order of the British Empire) for dedication to her work with Oncology patients in the field of Dietetics.

The prestigious award is given by Queen Elizabeth II, Queen of the United Kingdom and other Commonwealth countries, in her annual honours list. The award is given to an individual for outstanding service to the community or local “hands on” service.

Kaye graduated with a BSc Dietetics degree and Postgraduate Diploma from the former University of Natal (now University of KwaZulu-Natal) in 1991. After completing her degree, she worked at Northdale and Grey’s Hospitals in Pietermaritzburg, before settling in England where she worked primarily for the National Health System (NHS).

As a MacMillan Cancer Support Charity dietician within the NHS structure, she is being awarded the MBE for her work with oncology patients in assisting them with the diet-related side effects of their cancer treatment.

The MBE will be presented to Kaye on 2 May, 2019 at Buckingham Palace by a member of the Royal family.