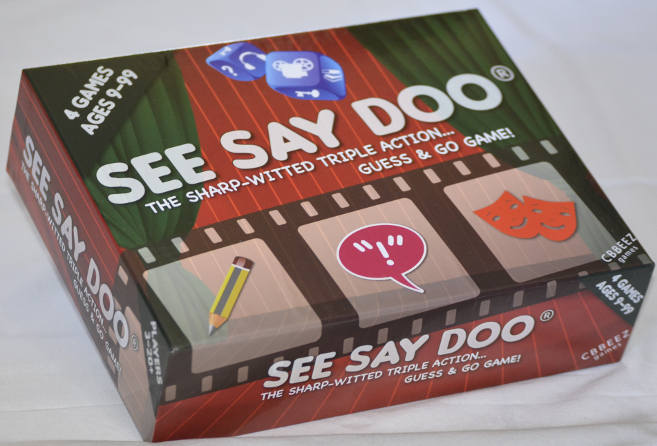 Browne said the three dimensional game ‘is a fun way to develop and stimulate communication, creativity, logic and thinking skills, providing endless fun and laughter’. He is excited by the fact that prototype players - some being game board addicts - have reacted favourably.

Players have a minute to SEE (draw), SAY (describe) or DOO (act) a name from a Category Card. Categories are literature, music, movies and general knowledge.

Browne got the idea to develop the game while playing Charades with colleagues from the Electoral Commission. ‘I thought if the titles to be acted out were on a card, it would be great fun.’ And so the game was born and soon after his retirement 14 years later, SEE SAY DOO® went into production.

He got encouragement to complete the game while listening to the radio. ‘The presenter’s guest said an idea should be written down to prevent it from getting lost forever. They cautioned against written ideas ending up in the grave so I decided mine would not die with me!’

Browne was born in Johannesburg and moved to Durban when he was three, later attending Westville High School. He graduated from the University of Natal in 1977 with a Certificate in the Theory of Accountancy.

He has three daughters Shannan, Natalie and Candice, and four grandchildren who he dotes on.

Players are known as performers and interpreters. Performers use their “SEE” (drawing), “SAY” (speaking) and “DOO” (miming) skills to correctly perform the answer they have read on the category card, while interpreters try to guess the answer. Each game lasts between 35 to 55 minutes and can be played by all aged between 9 and 99!

SEE SAY DOO retails at R329.90 and is available at