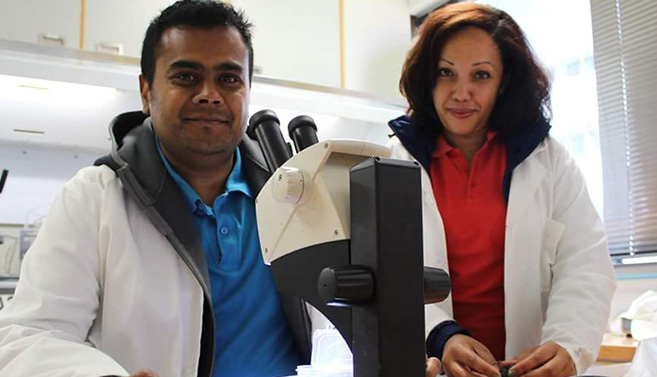 The training was on the topic of Material Science Preparation Techniques for Electron Microscopy.

Ms Lorika Beukes of the Pietermaritzburg unit, and colleague Mr Vishal Bharuth of the Westville unit, were sponsored through a National Research Foundation (NRF) equipment-related travel and training grant. The funding instrument is intended to support the broader science community to access state-of-the-art research equipment not available at their home institution or regionally or nationally.

‘Our philosophy as a microscopy unit at UKZN is predominantly to assist and train students and researchers on biological sample preparation and analysis using high-resolution microscopes,’ said Beukes, who is completing her PhD in Microbiology.

The training Beukes and Bharuth received at the CHRTEM will, Beukes says, benefit UKZN as their microscopy units will be able to provide workshops on bulk sample preparation techniques for the broader physics and material science community.

Beukes hopes the interaction could also facilitate collaborative work between the CHRTEM and MMU at UKZN, and could be useful should UKZN expand its microscopy facilities in the future to include high-end material science equipment.

‘The use of these high-end instruments will assist in enhancing research output in material science, and therefore advance knowledge dissemination to staff and students at UKZN and the broader scientific community,’ said Beukes.