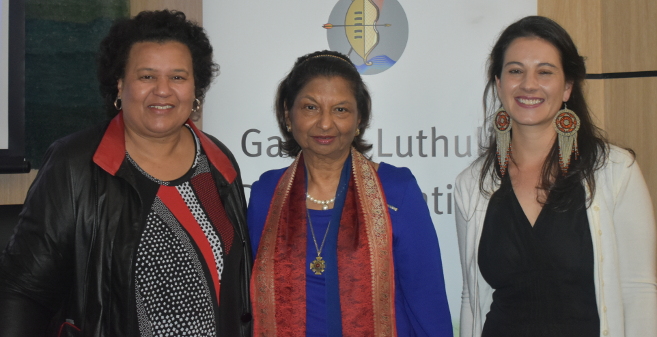 Role of Women in Fighting Apartheid Highlighted at UKZN Lecture

In celebration of Women’s Month and in honour of all women who gave up their lives in the fight for liberation, UKZN’s Special Collections Gandhi Luthuli Documentation Centre hosted the 2018 Phyllis Naidoo Memorial Lecture on the Westville campus.

Dr Phyllis Naidoo was an anti-apartheid activist, lawyer, author and teacher who wrote and published numerous books which recorded the history of the anti-apartheid struggle and the selfless contributions made by activists.

The lecture, a tribute to Albertina Sisulu for her centenary celebration titled: Sisulu 100 – The Role Women Played in the Fight for the Liberation of South Africa, highlighted the role women undertook in maintaining homes while husbands were detained, speaking up for the struggle, and being the unsung heroes of the time.

Dr Annie Devenish, a researcher from the African Ombudsman Research Centre, spoke about her research on the thousands of letters Naidoo wrote to family, comrades and friends across the world.

Devenish said she found the letters insightful and the more she read, the more it helped her see another facet of the numerous roles women like Naidoo played in the struggle against apartheid. ‘This role remains under acknowledged and under-examined. There is still a lot of work to be done,’ said Devenish.

She said the letters displayed the importance of personal relationships and friendships in the struggle. They give and seek love, consolation and advice; some are a cry in the wilderness grieving the loss of fellow activists; while others give instructions on sending money to colleagues for the support of families of prisoned activists.

She said others offer instructions on school fees, birthday presents and travel; while others provide commentary on unfolding political events in the country and neighbouring territories.

Sharing fond memories of Naidoo, keynote speaker Ms Elinor Sisulu said she got emotional speaking about Naidoo because she was like ‘a mother to me and treated my husband like her son.’

Author and political activist, Elinor thanked the University for having a lecture to honour Naidoo’s legacy. In her talk, she paid tribute to women who impacted on her life and shaped her development into the woman she is today. She also shared memories of her mother-in law, Albertina Sisulu, who she says represented ‘the best of the generation of women.’

Speaking about the 1956 women’s march, Elinor said there was a need to highlight the role of all the women who were present in the march.

A signed copy of Elinor’s shorter version of Albertina Sisulu’s biography targeted at schools was handed over to Myeza for the Special Collections.

Professor Betty Govinden presented two poems dedicated to Naidoo. She described Naidoo as a woman who chose communities over her own needs and said her writings tried to ‘rescue the forgotten’.

In her poem, Govinden honoured ‘mothers of our freedom and women of yesterday’ such as Princess Magogo, Nokutela Dube, Phyllis Naidoo, Charlotte Maxeke, Bessie Head, Phila Ndwandwe, Victoria Mxenge and others.

Director of proceedings and Advisory Board Chairperson, Ms Zandile Qono Reddy shared memories of her aunt and role model, Phyllis Naidoo, while Head of Special Collections, Dr Praversh Sukram delivered the vote of thanks.