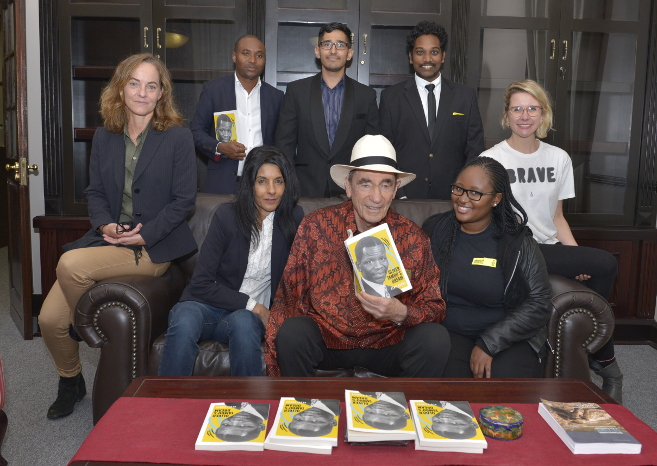 Retired Judge of the Constitutional Court Mr Justice Albie Sachs says expropriation of land in South Africa can be done peacefully through powerful and meaningful dialogue.

Sachs was speaking to UKZN staff and students and members of the public during the launch of the University’s Student Chapter of Amnesty International South Africa.

The event was organised by the Durban Chapter of the organisation, in collaboration with UKZN’s School of Law, at the University’s Howard College Theatre.

The lecture was titled: Constitutionalism and Land Reform in South Africa: Expropriation Without Compensation. Sachs said he was excited and relieved that the topic was on the table with discussions being held in Parliament.

He said the process should not be arbitrary or for people ‘connected with certain people in government’ who might or might not be good farmers. It was also not about ‘sweeping’ people out and bringing in new owners.

‘A lot could be done for the existing people on the land, White and Black, and the process should be carried out in such a way that production is increased and food security ensured. ‘We want proud owners of land, people connected with the land, eager to produce and who will work together,’ he said.

‘But as long as inequalities are as vivid as they are today, we will never have a productive nation.’ He advised farmers to maintain contact with new owners, to play a role in increasing production and to become part of building the South African economy.

Some members of the audience questioned the slow progress government has made regarding land reform. Sachs said everybody should take seriously the historical manner by which Section 25 of the South African Constitution was created and what the objectives were, what the text said and what the text is capable of, even now.

He said he was proud of the South African Constitution as it had weathered many storms.

Where I come from no one tells or shows you what it (Ubuntu) is, you feel it. Where you have wronged me, you should show me Ubuntu.’  He said showing Ubuntu was their core function as a Chapter.