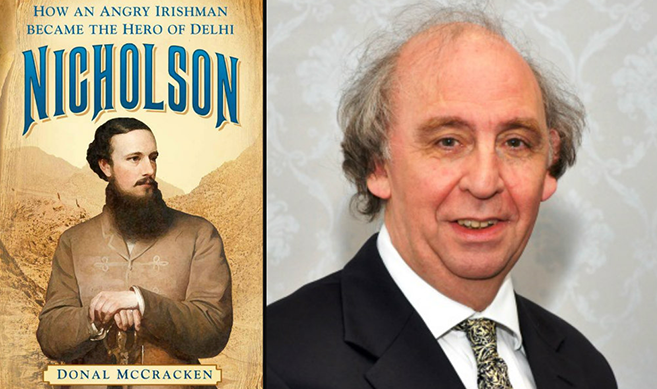 Professor Donal McCracken, the author of Nicholson: How an Angry Irishman became the Hero of Delhi which chronicled the life of Irish soldier, John Nicholson.

Historian and UKZN lecturer Professor Donal McCracken’s book, Nicholson: How an Angry Irishman became the Hero of Delhi, was 12 years in the making and took him to India, Ireland and Britain.

Published by the History Press of Ireland, it is a biography of an Irish soldier on the North-West frontier in the 1840s/1850s in what is now Pakistan called John Nicholson. McCracken describes him as ‘A very controversial figure - regarded by some as a hero and others as a villain (one writer calls him an imperial psychopath). I have tried to steer a neutral path, dismissing the many fanciful stories about him, and concentrating on the manuscript original sources, which are mainly housed in the Africa and Asian section of the British Library in London.’

According to McCracken, Nicholson’s legacy and his legend as the ‘Hero of Delhi’, outlived him. ‘As well as the Indian cult drawn to him, at home he became a hero and was portrayed in epic stories for children, inspiring generations of young boys to join the army. In more recent times, some turned the hero into a villain; others continue to consider him the finest army front-line British field commander of the Victorian era,’ he added.

Born in Dublin in 1822, Nicholson was raised and educated in Ireland. He joined the East India Company’s Bengal Army as a 16-year old boy-soldier and saw action in Afghanistan, the two Anglo-Sikh wars and the Great Rebellion or Mutiny. He died in the thick of battle at the age of 34 as the British army he was leading stormed the ancient city of Delhi in September 1857.

‘Nicholson was very bad tempered, caused in part because of the “blue pills” he took (as did Abraham Lincoln) which contained mercury and resulted in outbursts of indignation. He had a reputation for brutality, which is disputed territory. He preferred the company of Indian troops to fellow White officers and he had a religious sect (the Nikkol Seinee) who worshipped him as a god. He was perhaps the finest front-line battle-field commander in 19th century India but a fascinating and complicated personality,’ said McCracken.

The book can be purchased directly from the publishers or on Amazon.