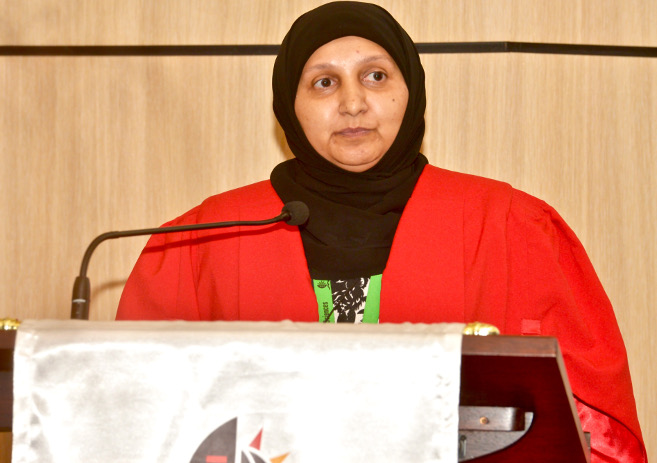 Delivering her inaugural lecture, the Discipline of Pharmaceutical Sciences academic and Drill’s Multiple Principal Investigator spoke on: Affordability and Equitable Access to Medicines for Public Health.

Suleman said essential medicines, as defined by the World Health Organization, are those that ‘satisfy the priority healthcare needs of the population.

‘These are the medications to which people should have access at all times in sufficient amounts. The prices should be at generally affordable levels,’ said Suleman.

‘If you look at diabetes, which is on the rise in low- and middle-income countries, access to life saving insulin can be problematic. That then poses problems for patients and their families in terms of affordability of life saving medicines,’ she explained.

According to Suleman, a family in Tanzania would, in most cases, spend 53% of family income on a child with type-1 diabetes. ‘Some preliminary research out of Tanzania on how families cope with insulin prices, indicates that 21% is financed out of pocket, 13% from support by non-government organisations, 35% from commercial loans, 23% from family loans, and 5% from selling things.’

She said, often the child did not get the second dose in the day to save on the insulin required. Thus, questions could be raised regarding the following:

‘It is no surprise therefore that the Sustainable Development Goals (SDGs) adopted in September 2015 by the member states of the United Nations, recognise that equitable access to affordable, quality-assured essential medicines is a crucial step in achieving universal health coverage,’ said Suleman.

Key stakeholders in this debate were the pharmaceutical industry. ‘At present a traditional business model exists for medicine research and development (R&D), and pharmaceutical companies are profit driven, having to account to their investors and shareholder,’ she said.

‘However, increasingly, there are academic-industry partnerships that work together in biotherapeutic research. In many cases, funding for the earlier work - or for some part of the work - is done at universities and comes from government agencies or from public funds. That was actually the case for Gilead’s Hepatitis C treatment that was initially discovered through National Institute of Health funded research, among others.’

She is also the Prince Claus Chair of Development and Equity for the theme Affordable (Bio) Therapeutics for Public Health (September 2016 to September 2018), at the Faculty of Sciences, Utrecht University in the Netherlands.

Suleman has also been appointed to the World Health Organization’s Expert Advisory Panel on Drug Evaluation (2017 - 2021).