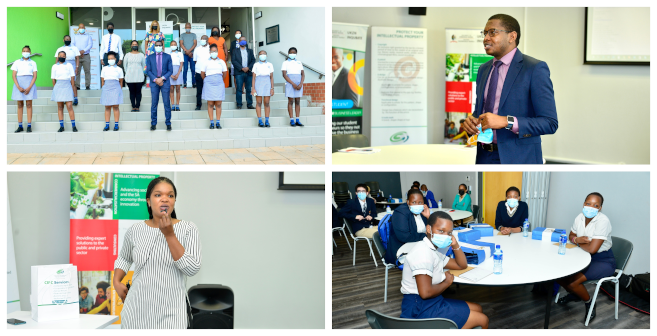 Five KwaZulu-Natal high schools were invited to do presentations during a UKZN Summer School Programme on their understanding of intellectual property (IP) and innovation.

Schools which took part were:

•    Newlands East Secondary School where a Smartway walking stick has been developed as an alternative to guide dogs.

•    Dumehlezi Secondary School which presented on an arts and drama performance and how it could be protected on the basis of Intellectual Property regulations.

•    Umkhumbane Secondary School where a diffusing system has been created to remove storm drain blockages.

In his welcoming address, UKZN’s Acting Deputy Vice-Chancellor: Research and Innovation Professor Mosa Moshabela encouraged students to fuel their curiosity in order to better understand things around them and drive progress and development in the world. ‘As you engage on issues of IP don’t think about it as something foreign or far away, but rather as something that can be applied to current everyday life.’ Moshabela wished the students well going forward and invited them to start imagining the future and realising that what they do today, impacts tomorrow.

The Acting Head of NIPMO Ms Paballo Masite remarked during her talk on how fortunate learners were to be exposed to IP at high school level and encouraged them to grasp a few concepts they could grow into as a field of interest or even a career. NIPMO is based within the Department of Science and Innovation and students were encouraged to view their website to find out more about service offerings.

The Executive Manager of CIPC, Ms Nomonde Maimela, explained how the organisation operated as an agency for the Department of Trade and Industry and was responsible for industry regulation and registrations of IP. Maimela said she was passionate about inspiring interest in IP among the youth as well as her company’s efforts to ensure that IP was incorporated in the basic education curriculum. Maimela focused on how IP was at the core of artificial intelligence, the fourth industrial revolution and the COVID-19 vaccines saying: ‘You need to be informed about how you can protect your IP as an inventor or artist so that you can benefit from it.’

Professor Sadulla Karjiker of Stellenbosch University gave an overview of copyright law and outlined how it was limited to literary, musical and artistic works. Karjiker explained how the work had to be original, in material form, with the author being a South African citizen residing or domiciled in South Africa or a Berne Convention country.

He said IP was the cheapest form of property one could own, but identified work created during the course of employment as the exception, as it became the property of the employer. He mentioned how copyright had a definite life span that was generally valid for 50 years from the year of the creator’s death or the time the work was first published.

Mr Gregory Khoza of the CIPC interacted with learners in a question and answer session on the various forms of IP including trademarks, design, copyright and patents.

In closing, Technology Transfer Manager Ms Charlotte Mashaba thanked the school principals, teachers and the students for their participation in the programme. She also thanked InQubate’s partners, as well as sponsors Innovate Durban, Spoor and Fisher Attorneys and Adams & Adams for making the event possible.