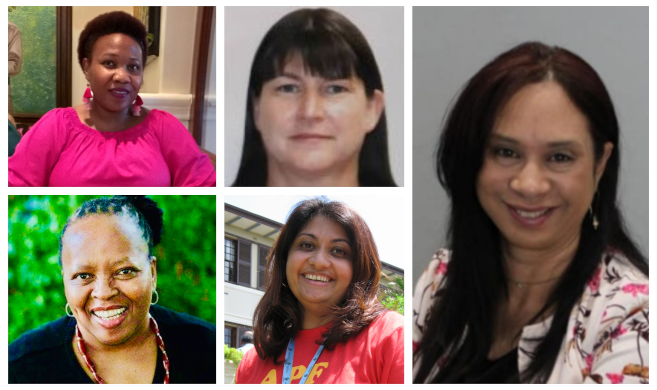 The Corporate Relations Division (CRD) in partnership with the National Prosecuting Authority (NPA) hosted a webinar titled, Stop Gender-Based Violence and Femicide, which sparked conversations on the growing occurrence of gender-based violence (GBV) in South Africa and around the world.

In her welcoming address, Acting Director: University Relations, Ms Hazel Langa presented statistics from the World Health Organization (WHO) which reveal that one in three women globally, are subjected to violence in their lifetime. She also reviewed crime statistics announced by the South African Police Minister, Mr Bheki Cele, which indicate that between July and September 2021 sexual offences increased by 4.7% and rape by 7.1% with over 9 500 cases of rape reported during that period.

Langa noted how educational institutions were not spared from the scourge of GBV and femicide (GBVF) and highlighted UKZN’s commitment to addressing this challenge through the GBVF Strategy, which she invited staff and students to read more about on the Intranet.

The facilitator for the event, Advocate Dawn Coleman-Malinga explained how the Sexual Offences and Community Affairs (SOCA) Unit of the NPA, valued its partnership with UKZN, saying the webinar series was aimed at creating awareness around GBV and improving the safety and security of the UKZN community.

Coleman-Malinga commented on the appropriateness of the webinar, hosted against the launch of the 16 Days of Activism against Gender-Based Violence, an event which is commemorated annually, from 25 November to 10 December. She also highlighted how the webinar would focus on the legal aspects of applying for a protection order, women and girls activism in the fight against GBV, and the National Strategic Plan on GBV.

Acting Head of SOCA from the Western Cape Division, Ms Lizelle Africa, delved into the Domestic Violence Act and defined domestic violence as ‘an ongoing pattern of coercive control that may be repetitive or increase in severity over time and vary in form from physical, emotional/psychological, verbal, sexual and economic abuse’. She commented on how the Act applies to persons married according to the law, custom or religion; parents of a child; family members; persons who were engaged, dating or in a romantic, intimate or sexual relationship; and those who share or have shared the same residence.

UKZN’s JL Dube Chair in Rural Education, Professor Relebohile Moletsane examined the activism of girls and women from the grassroots level in the fight against GBV. Showcasing the link between poverty, GBV and HIV she noted how women between the ages of 15 - 24 had the least amount of power in society and bore the burden of intimate partner violence and HIV. She highlighted how both men and women who had experienced GBV were more likely to exhibit behavioural patterns that increase HIV infection and also reviewed the high teenage pregnancy statistics in South Africa among girls aged between nine and 14, identifying them as victims of rape.

Moletsane commented on how the COVID-19 pandemic had reversed the progress made in gender equality and in addressing the 17 Sustainable Development Goals. She observed how girl-led activism required the support of adults due to power relation struggles in communities and institutions, and called on the public to empower and uplift women and girls rather than perpetuating the perception of them as vulnerable and victims.

Lecturer in the School of Social Sciences Dr Lubna Nadvi reviewed the National Strategic Plan (NSP) on GBVF focusing on government and civil society-led initiatives. She examined the various gender ministries which include the Commission for Gender Equality, legislation such as the Domestic Violence Act as well as Thuthuzela Care Centres.

Nadvi spoke about the national Total Shutdown marches that took place in August 2018 where women protested against the high levels of GBVF in the country. This led to a delegation of women meeting with the President and constituted the first Presidential Summit on GBVF in November that year. The summit ended with a declarational signing with all sectors agreeing to work together in eradicating GBVF which constituted the implementation of the NSP on GBVF.

Nadvi highlighted the one-year report on the NSP that recorded some successes such as the Department of Defence’s Men for Change launch which tackled sexual harassment within the workplace, but asked why the rates of GBVF across the country had not decreased; if government interventions were sufficient in responding to the prevalence and cases of GBV; how the COVID-19 pandemic had impacted the process; and what society should be doing in the meantime to address the scourge GBV across the country.