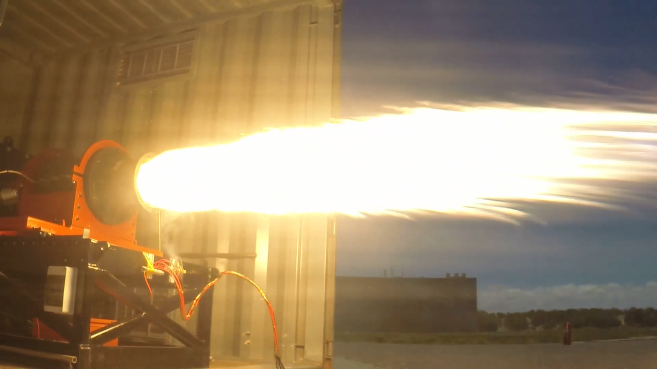 The Ablative Blow-Down Liquid Engine (ABLE) was designed by Mechanical Engineering students in the masters and doctoral programmes at UKZN.

ASReG is developing designs for a commercial launch vehicle able to place satellites of up to 200kg in orbit for communications, environmental monitoring, agriculture and Earth observation purposes. The successful operation of ABLE will enable the group to begin work on a flight-weight engine to power the proposed rocket.

ASReG’s Space Propulsion Programme is supported by the Department of Science and Innovation (DSI).

The ABLE engine combusts liquid oxygen (LOX) and Jet A-1 fuel to produce just under two tons of thrust, and is similar in design to engines powering the newest small satellite launch vehicles.

For the test campaign, students not only built the engine itself but also designed and qualified a state-of-the-art test facility with propellant storage tanks, an automated engine control system and a thrust stand to restrain the engine throughout its operation.

During testing, ABLE produced 18 kilonewtons (about 1.8 tons) of thrust in a series of short and long-duration burns. Although there are bigger commercial engines in operation, ABLE is one of the most powerful student-built liquid rocket engines ever produced.

With this development, UKZN has further strengthened its position as a South African centre of excellence in aerospace propulsion engineering. In March this year, ASReG broke the African hybrid rocket altitude record when it successfully launched a Phoenix rocket to 18km. ABLE is a different kind of engine, running on liquid propellants rather than the solid and liquid combination of the Phoenix rocket.

SAFFIRE Engine Programme manager at UKZN Dr Jean Pitot said: ‘The overwhelming success of our recent ABLE rocket engine test campaign is testament to the profound ability of young South African engineers to find globally-competitive solutions to today’s grand engineering challenges. The rapid evolution of society’s interaction with space over the past decade has been astonishing and is set to accelerate, as the services offered by burgeoning space-based enterprises become integral to our daily lives. The ASReG team is proud of the leading role that the University of KwaZulu-Natal is playing in laying the technical foundations for a sovereign space launch capability that will provide Africa with direct access to the space economy.’