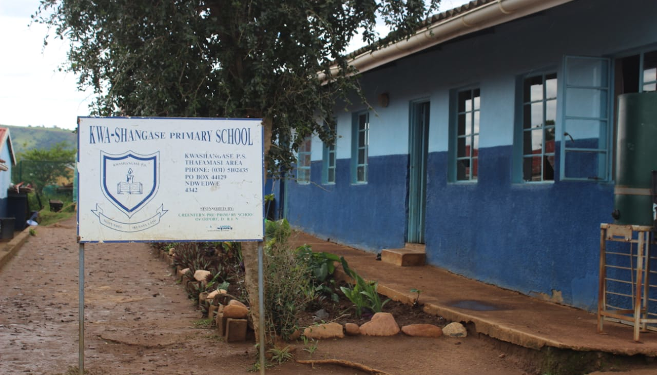 Donated computers were handed over to KwaShangase Primary School.

The School of Built Environment and Development Studies within the College of Humanities has donated computers to the registered Non-Profit Organisation (NPO) Computers 4 KZN Schools (C4KZNS).

The computers were handed over to KwaShangase Primary School in Ndwedwe in KwaZulu-Natal.

C4KZNS works to equip rural schools in the province with computers to assist in transferring information technology knowledge and skills to learners. The NPO actively involves community volunteers, such as unemployed youth who have the relevant knowledge and skills.

The organisation’s founder, UKZN alumnus Dr Phindile Shangase, is actively fundraising for the NPO’s website and other needs involved in project management. ‘I invite other UKZN departments and our ICS division to donate any unused computers - even obsolete computer processing units (CPUs) - so that the learners can get an idea of how computers works,’ said Shangase.

Shangase also urged research supervisors and postgraduate students to do research studies in rural areas. ‘Such initiatives inspire learners to enrol in computer sciences qualifications in the future, thereby increasing the pool of computer scientists so needed in South Africa. This is also a great opportunity to share solutions to Africa’s development problems as identified in the Sustainable Development Goals (2030) document.’

Dean and Head of the School Professor Ernest Khalema said: ‘Computers 4 KZN Schools comes at a time when UKZN is actively seeking to innovate in its community engagement initiatives. Therefore, such community partnerships are of great value to universities in South Africa.’

Academic Leader for Community Engagement in the School Professor Yanga Zembe-Zondi welcomed the initiative, emphasising the importance of community-based organisations (CBOs) such as C4KZNS in the partnerships that the School and UKZN form with communities. ‘It is through community engagement partnerships with organisations such as C4KZNS that the University is able to contribute towards the social and economic transformation of historically disadvantaged communities in South Africa,’ she said.

C4KZNS plans to partner with academic institutions in order to identify relevant funding opportunities that will assist in evidence-based interventions. ‘Teachers in these rural schools will get the opportunity to enhance their skills in technology and teaching and will benefit from the free training offered by the organisation,’ said Shangase.

The Principal of KwaShangase Primary School Ms A Dlomo thanked all those involved for the donation.