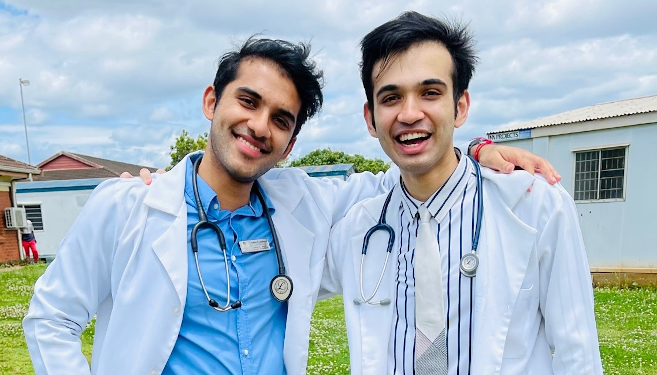 Twins Set to Change the Face of Medicine Together

They now await their final exam results expected to be released on 15 December.

The brothers both matriculated from Crawford College La Lucia with honours. Ishq was the top student at private schools and first in Crawford Advtech group nationally and is currently in the Top 5 best performing Medical students in the class of 2021. He received UKZN’s Pius Langa Scholarship and the Undergraduate Scholarship for final year.

Ashiq was ranked third in matric among students from independent schools scooping distinctions for all his subjects, receiving the UKZN merit scholarship.

Both boys are keen pianists with over 17 years of classical training and a host of gold and silver awards from local Eistedfods and Trinity College London.

Said Ishq, who is currently studying towards an ATCL performance diploma through Trinity College which is equivalent to a first-year recital of an undergraduate degree: ‘I am very passionate about music, and I feel that it perfectly complements the art of Medicine. Our musical studies were made possible through Ms Phillipa Greenwood, a fierce musician and family friend.’

Ashiq, who has a passion for medical writing, published his first book earlier this year, titled: The Great Medical Student Odyssey - Tales and Adventures in Medical School. A biography of his journey at UKZN’s Medical School, the 194-page book illustrates the incredible adventures and harsh realities of Medical students in South Africa. He was also inspired to pursue medical research while serving as a research placement at the Centre for the AIDS Programme of Research in South Africa (CAPRISA) and the KwaZulu-Natal Research Innovation and Sequencing Platform (KRISP) laboratories. His passion resulted in three publications - two with Pulse magazine and the Albert Einstein College of Medicine and one with the Harvard Medical Student Review journal.

As top Medical students at UKZN, the Pramchand twins created a student organisation on campus to improve the speaking and writing skills of healthcare professionals through the development of lectures and study resources for students. The club, BROCA, also produces a student magazine, called the BROCA Times, which is distributed to students.

The brothers have played an active role in UKZN’s South African Medical Students Association (SAMSA), serving in various portfolios. Through SAMSA, they formed a partnership with Habitat for Humanity, an NGO which builds homes for disadvantaged rural communities. While working in rural Umgababa on the KwaZulu-Natal South Coast, the Pramchands provided information on tuberculosis as well as arranging free HIV testing for the local community.

Apart from achieving academic excellence, research excellence, engaging in the uplifting of local communities, working on becoming professional pianists and engaging in clinical work as part of their curriculum; the twins are also keen sportsmen. Both trained in Northern and Southern Kung Fu styles at the Chinese Martial Arts and Health Centre in Durban with Ishq also having completed one year of Tai Chi/Qi-Gong training. In 2013, the twins also represented the KwaZulu-Natal team at interprovincial Table Tennis Championships in Bloemfontein and both boys completed the Midmar Mile.

Ishq who speaks conversational Japanese, which he learnt throughout his travels in the Far East, said: ‘I enjoy travelling during holidays, language learning, dramatic arts and theatre, and reading, while family time is very important to me. Watching movies and going out with friends are a must every Friday. Playing a game of tennis at least once a week with Ashiq is great for a mental reset. I also love green tea.’

In his book, Ashiq details their adventures as Medical students: ‘Thousands of hours are spent at the bedside and in the operating theatre. Blood will be drawn. Tutorials will be attended. Friendships will be forged in the wards - those democracies of appearance. You will see patient gowns, devastated and relieved complexions, tubes and IV lines. In this crucible, where life is renewed and taken away, we witness some of life’s most beautiful and crushing moments. These places are autoclaves for the soul, where pressure, high patient caseloads, and low resources purify us - they force us to abandon or challenge our vices, to help others. These experiences are life-changing and profound. In my anecdotes, I try to capture this profoundness…the clinical years are where the real adventure begins.’

Both boys attribute their passion for Medicine to their father, Dr Mahendra Pramchand, ‘Our passion for medicine started at a very young age, inspired by our father who always selflessly and passionately treated his patients. His love for medicine and people continues to inspire us.’

‘We also thank our mum Advocate Nalini Govender for her ongoing support throughout our studies.’

The twins are keen to travel to exotic destinations such as Mongolia but also look forward to serving their Medical internships next year and specialising in the coming years. Ishq aims to specialise in surgery or internal medicine whilst Ashiq is exploring a surgical speciality.