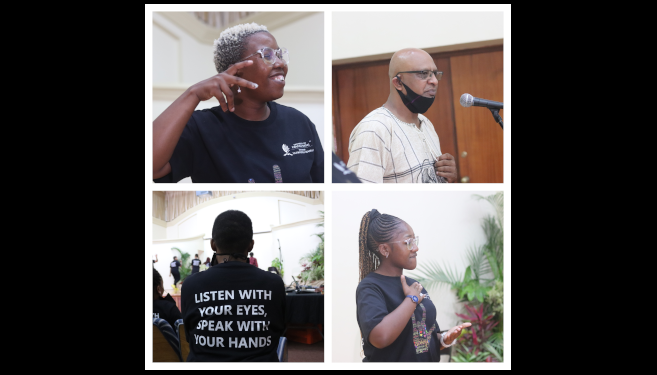 Scenes from the Listen with Your Eyes, Speak with Your Hands event.

Listen with Your Eyes, Speak with Your Hands was the theme of a performing arts initiative hosted by Deaf students who use South African Sign Language (SASL) at UKZN.

With a steady increase in the enrolment of Deaf students at UKZN since 2016, significant progress in providing SASL services have been made by the UKZN’s Disability Support Unit (DSU). There are currently 11 Deaf students registered across three of UKZN’s campuses.

The initiative aimed to increase awareness of Deaf culture and SASL as well as draw attention to Disability Month which culminated with the International Day of Disabled Persons (IDDP) on 3 December.

Disability Co-ordinator on the Howard College and Medical School Campuses Mr Nevil Balakrishna, who served as the programme director for the event, reflected on some of the milestones achieved by UKZN which graduated its first Deaf student in 2020 with the individual subsequently enrolling as the first Deaf postgraduate student at the Institution.

Said Balakrishna: ‘Today is about showcasing the talent of our Deaf students. They have had to face numerous challenges and barriers in the basic education system as well as in applying and navigating their way to access Higher Education.’

He highlighted the three levels that define people with hearing loss and the coding system used in South African Higher Education:

D: Deaf people who recognise SASL as a medium of communication

d: Deaf people who have hearing loss but don’t use SASL

HoH: Persons hard of hearing and using a range of assistive devices and technology, or with cochlear implants to optimise their residual hearing.

UKZN student Ms Philile Shezi spoke on the topic of Deaf culture which she described ‘as a way of living that allows Deaf people to know who they are and live in a way that is unique to them including their beliefs, behaviour and religion.’

She explained some common behaviours deemed acceptable in Deaf culture and considered rude in the hearing culture such as: tapping one on the shoulder to gain attention and, establishing eye contact with all persons whether an adult or a child.

Shezi listed a few of the don’ts in Deaf culture, including grabbing a Deaf person’s hands while they are speaking; yelling or using exaggerated mouth movements; speaking when a Deaf person isn’t looking at you; standing or walking in between Deaf people when they are communicating; giving Deaf people labels; mocking them or using funny gestures that are offensive; and speaking all at once which is disruptive, especially during online lectures.

During the performing arts initiative, the students performed a thrilling drama piece that illustrated some of the hardships experienced by Deaf children and their families in the journey to accepting their disability.

Noting how deafness is an invisible disability, Balakrishna encouraged families to focus on acceptance and communication as important tools in providing a sense of belonging for the Deaf. He said the initiative was designed to create awareness and debunk myths in order for better communication pathways to be developed with the Deaf community.

The students performed a musical item in which they translated Michael Jackson’s Heal the World and You are not Alone into SASL. UKZN students Ms Londeka Phakathi explained how this was achieved through listening to the vibrations of the songs and tons of practise, while Ms Thabile Qondani shared a poem by Sandra Stolnik titled, Being Deaf.

The audience was treated to a routine that showcased some of the student’s best dance moves.

Closing the event, Balakrishna noted how this was the first initiative of its kind at UKZN and acknowledged the role played by the 11 Deaf students at the University who planned the show and performed in it.

He also recognised UKZN alumnus and employee, Mr Lungelo Mbatha for his donation of R50 000 to the DSU to fund like-minded programmes.

Balakrishna thanked all those in attendance, especially the sign language interpreters, for providing their much-needed support to the Deaf students. ‘The highest form of democracy for disabled people is when they themselves lead their own development - and this has been the perfect example!’