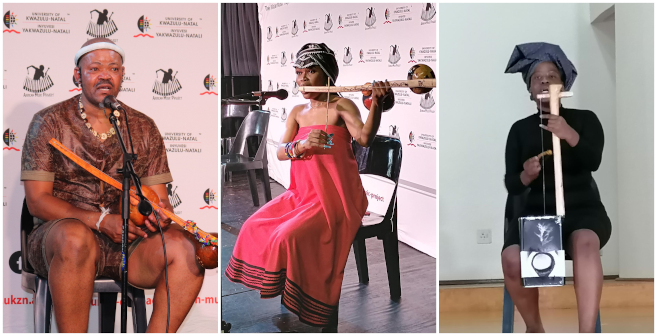 African Instrumentalist was “Artist in Residency” at School of Arts

The School of the Arts, in partnership with the Mellon Foundation’s Artist in Residence programme, has hosted artist and African music instrument maker and player Victor Gabela Sithole, who spent three months working with students in the African Music and Dance (AMD) discipline.

Sithole worked with several AMD and music foundation students teaching them how to play a range of indigenous instruments through intensive workshops and was a featured artist during UKZN’s 2021 African Cultural Calabash.

He also performed alongside students as part of their final-year exit recitals. During a final concert presentation before his departure, Sithole performed on a variety of indigenous instruments with all AMD students he had worked with.

‘It was an amazing experience for me to teach students about indigenous instruments,’ he said. ‘I applaud the Director of the African Music Project and senior lecturer Dr Patricia Opondo and her entire team for allowing me to spread the gospel of who we are as African people through these culturally academic activities. The residency was invaluable as I got to share my knowledge and experience with the youth.

‘I am also grateful to the Mellon Foundation for the rare opportunity. I look forward to collaborating with them in terms of acquainting our children with our cultural knowledge.’

AMD student Ms Zama Mlambo said she had learned a lot about indigenous instruments thanks to Sithole. ‘Not only did we learn how to play them but we learned about the type of wood that is used to assemble them as well as their original purpose and who played them. An important fact about indigenous instruments is that they are sacred - they have a specific purpose, a spiritual alignment,’ said Mlambo. ‘Victor Sithole taught us with great respect and humour, reminding us why we pursued African Music and Dance. Thank you to Mellon Foundation, Dr Opondo and the AMD third-year class of 2021.’

Said Opondo: ‘Victor Sithole’s residency has left a very important mark on the programme as students learned to play these rare Zulu instruments. Second-year students will have more time to further their mastery of the instruments, and contribute towards their revitalisation both within KwaZulu-Natal and globally,’ said Opondo. ‘In his final concert in November, Sithole shared the stage with all the AMD students he’s been teaching, producing a memorable concert. We will air the concert online on the African Music Project Facebook page this month.’

Opondo thanked the Mellon Foundation, the Dean of the School of Arts Professor Nobuhle Hlongwa, and Professor Nogwaja Zulu for inviting the AMD programme to be one of the School’s hosting partners. ‘Hosting two luminaries in the music heritage sector Mr Mbuso Khoza in 2019 and Victor Sithole was significant, as the students had the unique opportunity to engage with these two cultural icons. The Artist in Residence programme has allowed UKZN to further foster significant community engagement,’ she said.

He combines Western and African instruments, more especially Zulu indigenous instruments, and celebrates indigenous music and culture with a crossover into jazz producing what he calls “indijazz”. He leads the Durban-based outfit ilima which plays his neo-traditional compositions.