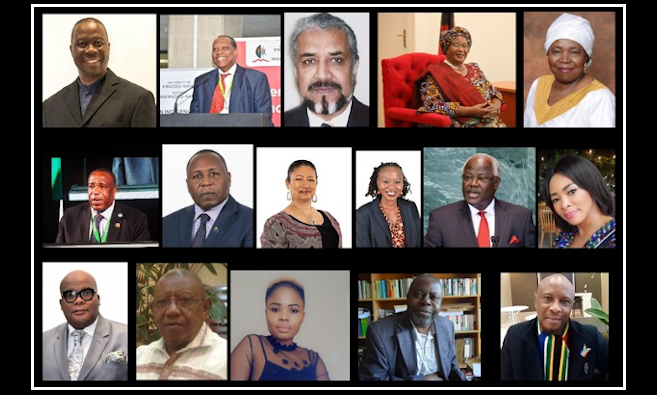 Dignitaries who constituted the high-level panel during the virtual colloquium convened by AIIKS at UKZN in partnership with the Africa Forum.

The role of African Indigenous Knowledge Systems (IKS), home-grown philosophies, indigenous languages, youth and gender dimensions in conflict resolution and peace building for sustainable development was the focus of a high-level virtual colloquium convened by the African Institute in Indigenous Knowledge Systems (AIIKS), with its hub at UKZN in partnership with the Forum for Former African Heads of State and Government (Africa Forum).

On behalf of the UKZN Vice-Chancellor, Deputy Vice-Chancellor and Head of the College of Humanities, Professor Nhlanhla Mkhize welcomed the more than 400 guests and participants. He said that the colloquium would be a step towards realising the seven aspirations of the African Union’s (AU) Agenda 2063 to build the Africa we want. Focusing on the fourth aspiration: A Peaceful and Secure Africa, Mkhize said that despite great strides in achieving peace and security on the continent, a long way still lies ahead. ‘We cannot claim victory when gunfire is still heard in Mozambique, Ethiopia, Sudan and many other African countries.

‘There can be no claim of gender equality when women are victims of gender-based violence and girls continue to be kidnapped by militant groups in many countries across the continent. When calls for democracy continue being silenced through violent means by regimes whose times have passed, we cannot claim victory. But we remain hopeful that we are making significant progress. We are also mindful that solutions lie within our own indigenous philosophies,’ said Mkhize.

In her keynote address, Her Excellency Dr Dlamini-Zuma acknowledged the significance of the intergenerational conversation taking place during the 16 Days of Activism for No Violence against Women and Children Campaign and noted that the colonial system dismantled IKS that protected women. Furthermore, women traditionally played an important role in peacekeeping and unity.

Her Excellency, Dr Banda commended UKZN for organising the colloquium. She said the continent needs to ensure that harmful traditions are checked and eradicated and that women should be involved in identifying credible leaders. She also emphasised the need to promote arts and crafts, which convey messages about African history, highlighting that women play an important role in storytelling as part of an intergenerational dialogue.

Noting that women were the custodians of IKS for conflict resolution, peace building and security, His Excellency Uteem quoted the founder of Pakistan, Muhammad Ali Jinnah: ‘There are two powers in the world; one is the sword and the other is the pen. There is a great competition and rivalry between the two. There is a third power stronger than both - that of the women.’

Professor Hendricks highlighted women’s right to participate in peace-building and cited the example of Queen Nzinga in African history who was instrumental in limiting the slave trade. She asserted that Pan-Africanism is the only way to build peace.

Professor Matlosa observed that Africa is a conflict-ridden continent, with 27 million people displaced, the majority of whom are women, youth and children. He highlighted the relevance of African IKS home-grown philosophies and indigenous languages in peace and security initiatives. COVID-19 has disrupted the AU’s conflict resolution efforts. Matlosa noted that the AU Agenda 2063 cannot achieve peace-building without IKS solutions. There is also a need to decolonise education and adopt policies that make people proud of their own languages, while adopting one language for Africa.

UKZN alumnus Dr Moroe spoke on the recent South Africa-Nigeria youth dialogue for Peace and Security, Youth Development and Political Participation, signed on 1 December 2021 by President Cyril Ramaphosa (South Africa) and President Muhammadu Buhari (Nigeria) in Abuja, Nigeria. He remarked that, while Africa has two of the largest economies in the world, it is home to the poorest people. The notion that the youth lack skills is often misplaced because very little attention is paid to teaching them about the potential of African IKS as resources for sustainable community livelihoods and development.

Dr Akombe said Africa needs to reimagine its governance systems and decolonisation agenda, while Ms Moamogwa called for an overhaul of the education system to meet the needs of the youth.

Ms Dlamini noted that African women remain socially and economically marginalised, and continue to be sexually and physically violated. She spoke to the need to teach children about Ubuntu and Pan Africanism. She referred to challenges such as girls dropping out of school because of the lack of school sanitation, carrying out home duties, child marriages and a lack of sanitary support during menstruation. Dr Dlamini-Zuma concurred and added that around six million young people are neither in work, in training nor in school. She indicated her willingness to partner with UKZN to discuss training women through the Association of Women in Mining in Africa.

Professor Kabudi commented that it is important to draw from ‘our own lived experiences, explore African philosophers and thinkers across generations, and engage retired African leaders and professors, not only those who went to university, but elders in our communities.’

In his closing remarks, the High Commissioner of the United Republic of Tanzania to South Africa, His Excellency Mr Gaudence Salim Milanzi observed that few African youths have the opportunity to interact and benefit from the lived experiences and wisdom of their elders, especially former African heads of state and government. The colloquium was an excellent example of such initiatives. He emphasised that Africa cannot achieve sustainable development in an environment of conflict, whether arising from internal or external factors. His Excellency Milanzi added that building on the indigenous is not necessarily what is traditional, but whatever the diverse African peoples consider to be an authentic expression of themselves. Interfaced with other knowledge and technology systems, especially the digital knowledge and skills, and artistic creativity of the African youth, as repositories of our knowledge and value systems, IKS have the capacity to transform our rich diversity of natural, cultural and linguistic resources into unique goods and services for the local, national, regional, continental and global markets, creating job and wealth opportunities for marginalised communities and social groups, especially African women and the youth. This will make a significant contribution to humanising the individualism embedded in globalisation and the 4th Industrial Revolution and create an Ubuntu/human-based environment for sustainable development. It will enable the identification of culturally and ecologically acceptable, affordable and accessible solutions to global challenges including climate change, poverty, conflict resolution, environmental degradation and corruption.

His Excellency Milanzi concluded by remarking that platforms like the high-level colloquium need to be encouraged and supported to promote intergenerational dialogue across gender, age groups, cultures and linguistic backgrounds. There is need to make visible African women and girls’ contribution to public policies for both rural and urban sustainable development. One of the best strategies to empower African women and girls is to encourage more African women, especially female students, to research and publish on pertinent issues on African women’s and girls’ rights.

To view the full colloquium, follow this link: https://www.youtube.com/watch?v=ZHoLDycMdBY