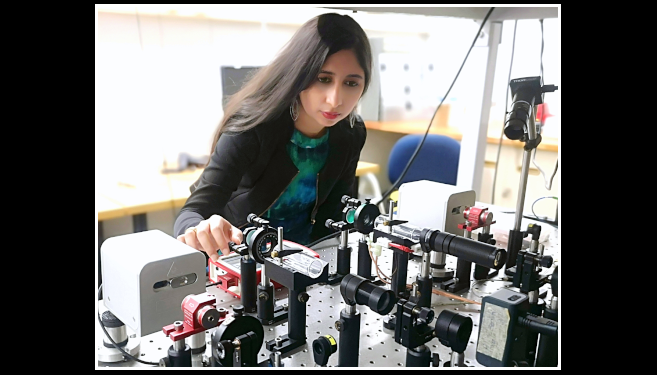 Dr Yaseera Ismail, a senior lecturer in the School of Chemistry and Physics and a member of the Centre for Quantum Technology has been invited to serve as an appointed Vice-President of the International Commission for Optics (ICO) for a three-year term, representing the international society Optica.

The ICO was established more than seven decades ago to contribute to the progress and diffusion of knowledge in the fields of optics and photonics. As one of its seven international organisational members, Optica elects a member to represent it in the ICO. Ismail was recommended by Optica’s CEO and is the first South African to serve as an ICO Vice-President on behalf of Optica.

Optica - formerly the Optical Society of America - is a well-established international society affiliated with over 300 universities worldwide and boasting more than 30 000 members, with its own publishing house and reputable quintile one Optica journal.

‘Optica’s reputation speaks for itself and I am honoured to have been recommended to represent it at the ICO,’ said Ismail.

Affiliated with Optica since 2008 when she was a master’s student based at the Council for Scientific and Industrial Research, Ismail has engaged in several activities from being a student member to a professional member, including being selected as an Optica Ambassador (the only South African to have been selected), co-founding a mentorship programme and the Optica student chapter in Durban, helping to promote the Optica Ambassador drive for scholarship support for Black scientists and engineers, participating in its travelling lecturer programme, serving as a technical executive member of the Non-Linear Optics Technical Group and chairing one of Optica’s medal award committees.

Ismail will represent Optica at ICO meetings, vote on relevant motions, organise events, disseminate information about the ICO, and contribute to the vision of how the commission will progress. The role will enhance networking between Ismail and scientists from other countries, provide increased access to information, programmes and opportunities for South African scientists, and enhance awareness of the field.

Ismail is looking forward to drawing attention to UKZN’s contributions to optics and photonics and to working with the ICO not only in its general promotion of optics and photonics, but also in its strong focus on the developing countries among its 53 Territorial Committee Members.

While South Africa is not currently one of the 53 ICO Territorial Committee Members, local scientists are driving the establishment of a territory in the country where despite being small, the optics and photonics community is well-established, internationally-recognised, and poised to contribute its knowledge to greater investment in quantum technology.

Ismail, who recently received a Y1 rating from South Africa’s National Research Foundation, graduated with her master’s cum laude in 2011 and her PhD in Physics from UKZN in 2015, focusing on quantum communication. Her research focuses on quantum information science, specifically the development of quantum optical tools to advance free-space long-range secure quantum communication. She is part of a BRICS multilateral collaboration to develop a Quantum Satellite and Fibre Communication network in South Africa, was selected for the Department of Higher Education and Training’s Future Professors Programme, is the recipient of a TechWomen Emerging Leader Award from the US Department of State, and is an Editorial Board member of the Scientific Reports journal.