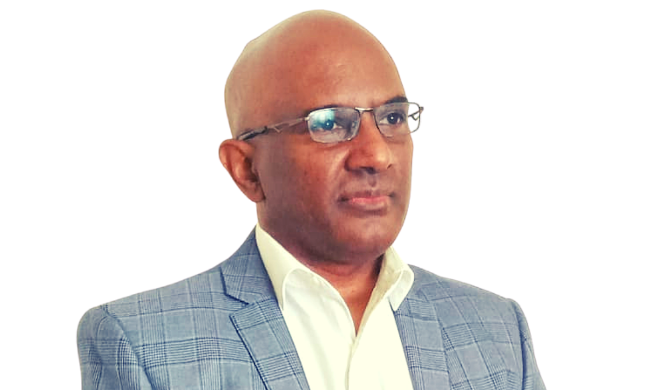 UKZN Behavioural Scientist and Director of the Health Economics and HIV/AIDS Research Division (HEARD) since 2011, Professor Kaymarlin Govender delivered his inaugural professorial lecture under the title: Preventing HIV Among Young People in Eastern and Southern Africa: Progress and Challenges in Addressing Psychosocial and Structural Drivers of Risk.

Govender has been a researcher and technical advisor for the past 25 years on health programming in sub-Saharan Africa with a special focus on HIV and sexual and reproductive health and rights.

Introducing Govender at the presentation and outlining his resume and long list of accomplishments, College Dean of Research and Acting Dean and Head of the School of Accounting Economics and Finance Professor Colette Muller said: ‘Professor Govender has worked extensively with international and national funding agencies, including the Swedish International Development Corporation Agency, the Royal Netherlands Embassy, the Department of International Development (DFID), Joint United Nations Programme on HIV/AIDS (UNAIDS), United Nations Population Fund (UNFPA), United Nations Children’s Fund (UNICEF), the Centre for Disease Control (CDC), the Bill & Melinda Gates Foundation, the Global Fund and the Wellcome Trust. More recently, he has been working on HIV programming on key populations with the HIV Secretariat of the South African Development Community (SADC).

‘Professor Govender has served as a principal investigator or co-investigator on several multi country research studies, focusing on the social and behavioural aspects of HIV, and has led bilateral partnerships with universities and research institutions in Sweden, Norway, France, the United Kingdom, the United States, and a variety of African countries,’ said Muller.

In his address, Govender considered the epidemiology of HIV infections in eastern and southern Africa, psycho-social development models of youth health, samples of evidence on risk and resilience processes to sexual health, and guidelines for HIV prevention programme design.

He said although HIV testing services had improved since 2010, two out of 10 people are currently living with HIV in the region, with many not knowing their HIV status. In 2019, about 20 million people - 12 million women and more than 7.6 million men - in eastern and southern Africa were living with HIV.

A total of 78% of adults and 57% of children were on antiretroviral drugs. While, the rate of new HIV infections is stabilising in some of the hardest hit countries, yet it remains far too high, not least because the future cost of maintaining an ever-expanding pool of people reliant on daily treatment for survival is unsustainable.

Govender said HIV prevention targets for 2020 had not been met, and to have any hope of ending infections by 2030, efforts would have to be increased significantly through a multi-sectoral effort.

On the issue of new HIV infections by population across sub-Saharan Africa, he highlighted that new infections in women aged between 15 and 24 were more than twice as high as those for males in the same age group.

He said risk of being infected by HIV was exacerbated by gender inequality, poverty, dependence on men, gender-based violence, alcohol and drug abuse, and mental health issues. Notwithstanding the complexities in the HIV epidemic in ESA, Adolescent Girls and Young Women (AGYW) remain the “face” of ongoing HIV transmission and their male counterparts bear the increasing burden of AIDS-related deaths, while Young Key Populations (YKP) have shown elevated rates of new HIV infections with widespread prejudice, stigma and human rights violations limiting their access to HIV services.

Govender said there was a need to focus on promoting a combination of prevention initiatives such as biomedical, behavioural and structural interventions to reduce HIV risk. While combination prevention interventions were been implemented in some contexts in southern and eastern Africa, existing human rights barriers to accessing HIV and Sexual and Reproductive Health (SRH) services was still evident.

'The impetus for more effective HIV prevention programming also raises some general issues for future programming. How can we collectively capitalise on these opportunities and use them as avenues to engage with young people themselves on the multiple issues affecting their lives? We need to work with young people in all their diversity on accessing benefits of HIV/ SRH services. In addition, the increasing focus on YKP increases prospects for challenging the heteronormative orientation of much research, policy and programming to allow issues of diversity to come forward as part of evidence-building on policy and programming,' said Govender.

Govender advocated for the need to bolster the capacity of civil society to gain investments in social and human rights programming to reduce stigma, shift harmful social norms, and promote the inclusion of sexually and diverse gender minorities, while driving health services towards people-centred approaches.

Between 2014 and 2018, he was a visiting professor at the Sahlgrenska Academy at the University of Gothenburg in Sweden, and also served as a member on the South African National Research Foundation (NRF) Centre of Human Excellence and Human Development, where he has held several NRF grants.

He also has an established research record having authored more than a 130 peer-reviewed articles, with several publications in Q1 journals; he has also supervised many PhD and master’s students.

While serving as associate editor of the African Journal of AIDS Research, Professor Govender led international special editions on the challenges of implementing HIV/AIDS programmes in eastern and southern Africa. He has also served and currently serves on several regional and international committees and task forces on HIV and human rights and health programming focusing on eastern and southern African regions.

Said Professor Muller: ‘His research on health promotion and advocacy activities has had considerable influence at local, national and international levels.’

Offering his congratulations on behalf of the University community and congregation, the Acting Deputy Vice-Chancellor and Head of the College of Law and Management Studies, Professor Brian McArthur, said: ‘Professor Govender’s wide ranging research and endeavours have contributed significantly to knowledge generation on the socio-economic aspects of public health, especially the African HIV and AIDS pandemic.’

‘Professor Govender’s research output, has provided multidimensional perspectives on intervention strategies that can be adopted by other researchers and policymakers in the prevention of HIV infections among the youth in our region,’ said McArthur.