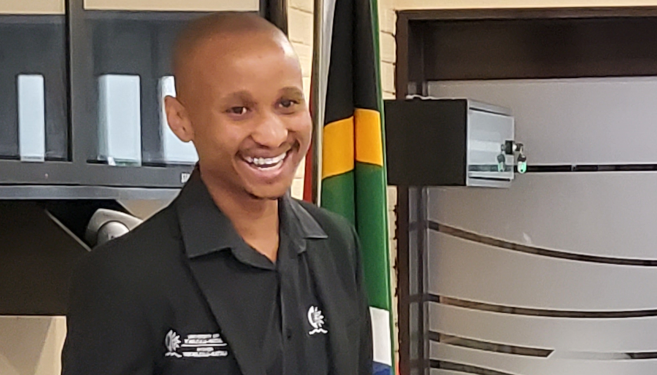 Having joined UKZN in 2017 after facing academic hardship, Nkambako served at all levels of student leadership in the Institution, from house committee, to the Joint Chairperson Committee (JRC), Campus Representative Council (CRC) and Student Representative Council Executive (SRCE) deployed by the South African Students Congress (SASCO). He also served as a peer educator.

‘I have never lived an easy life. I have always been a go getter, especially if I have identified what I want. I don’t give up easily and I’m forever motivated,’ said Nkambako.

He added that he is grateful for the numerous skills that he acquired during his time as president of the SRC and that this will assist him in his new role at the SAUS.

‘My term of office has improved my communication and listening skills, which contribute to finding practical solutions to the issue at hand. I have learnt that a strong, positive team is needed to succeed, with a strong leader that is not afraid to take decisions. I have also seen the importance of unity in both the structure and the people you are leading,’ said Nkambako.

His vision for the SAUS includes tackling the student debt crisis, working for free education, creating positive working relationships between the union and different stakeholders across South Africa and addressing gender-based violence.

‘I have always taken the initiative to challenge the status quo in the Institution without any fear or favour but mostly by treating all students fairly. The organisation that deployed us taught us that it’s always better to win issues at the negotiating table rather than resorting to war or strikes. This has made me a better leader,’ said Nkambako.