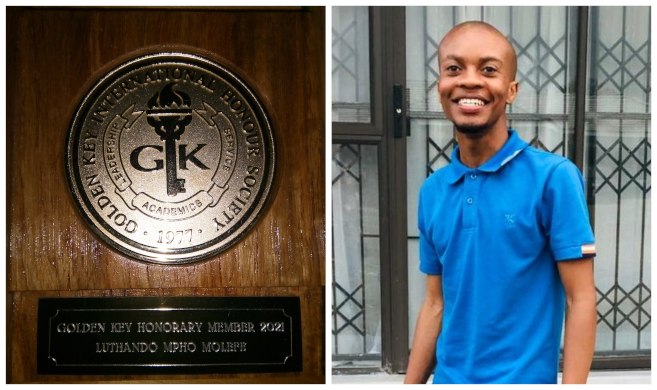 Master of Education student Mr Luthando Molefe has received a Golden Key International Honour Society (GKIHS) honorary award and membership for his community involvement and achievements in the Society’s three core pillars - academics, leadership and service - over the past six years.

Molefe is one of UKZN’s youngest recipients of the award and membership.

‘It is with a deep sense of gratitude that I accept this prestigious award and membership from GKIHS,’ he said. ‘It is a reward for the many hours of hard work and dedication I have invested in the three pillars over the years and in collaboration with others.’

GKIHS is an internationally recognised, non-profit organisation affiliated to more than 400 universities in Australia, Canada, India, Malaysia, New Zealand, South Africa, The Bahamas and the United States. The Society’s mission is to enable members to realise their potential by connecting individual achievement with service and lifelong opportunity.

Golden Key UKZN Pietermaritzburg Campus and Community Outreach Director Ms Nosipho Mkhize congratulated Molefe saying: ‘Well done to Luthando on all his prestigious achievements as well as for being a leader and for his academic leadership and community engagement skills. May this achievement open more doors for you in the future.’