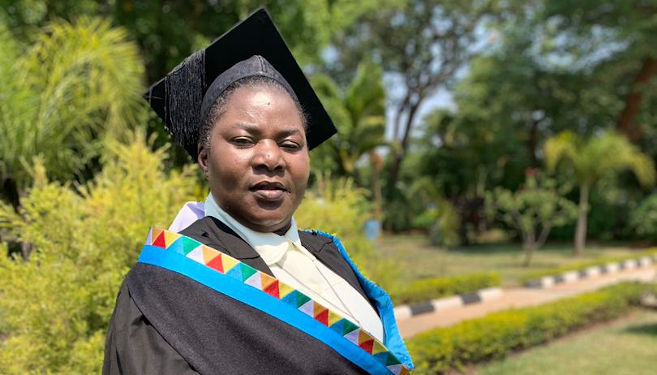 Ms Petronella Bweupe was awarded a Master’s degree in Theology.

A study by Ms Petronella Bweupe of the Sisters of Mercy for a Master’s degree in Theology delves into the different approaches by the Catholic and Anglican churches towards women being ordained into the ministry.

The research explores in detail how women’s ordination is an issue of divergence between the two churches.

‘Theological thinkers have extensively debated about how the involvement of women in the clerical space has dominantly challenged the unity between the Anglican and Roman Catholic churches,’ said Bweupe.

‘Theological studies seem to be a man’s academic space in the Catholic Church. This has led to African women in the Catholic Church being passive participants in theological and church issues. I am convinced that if more women studied theology in Africa, especially in Zambia, it will make a difference in the church because a lot of women theologians will add their voices to the life of the church and  be able to participate in shaping the life of the church,’ said Bweupe.

Passionate about gender equality in the Catholic Church structures, she strongly believes that experiences of African women have given shape to the history of Christian theology. She plans to contribute to the future of theology by taking part in the formation of priests and religious women through teaching in theological institutions, seminaries and houses of formation for religious women.

Through her writings, Bweupe plans to advocate for the inclusion of women theologians in decision-making processes in the Roman Catholic Church. ‘I would also like to see the status of women improve through better female representation in the structures of the church,’ she said.

She says she will develop her PhD thesis titled: The Domestic Church: Evaluating the Role of the Small Christian Communities (SCCs), in implementing the Pastoral and Missionary Vision of Vatican II.

Bweupe thanked her family, friends and supervisor Professor Sue Rakoczy for their support.

Said Rakoczy: ‘Sister Petronella has a very bright future as an African woman theologian, and I look forward to her contributions.’

Head of Gender and Religion at the School of Religion, Philosophy and Classics Professor Charlene van der Walt added: ‘Sister Petronella has completed an important study within the gender and religion landscape and as a senior faith leader in her religious tradition she will make an important contribution as a change agent working for the liberation of women.’