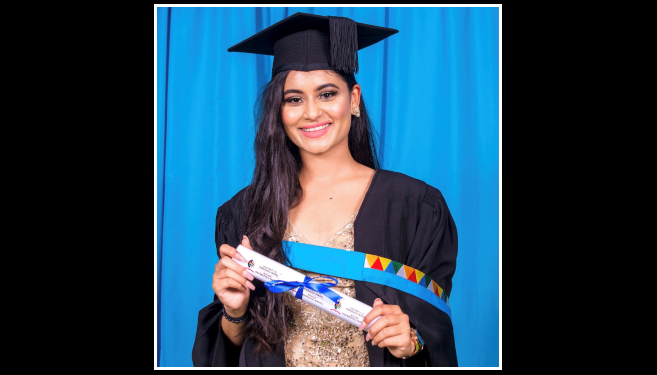 Exploring the concept of Gender Mainstreaming in Urban Space to Promote Inclusive Cities: A Case of Warwick Market, earned Ms Kiara Rampaul a Master of Town and Regional Planning degree.

Rampaul, whose research concentrated on theorising urban spaces through a feminist planning perspective, says while there is gender balance in urban spaces, the urban environment could still be considered as mostly “a masculine sphere”.

Her research was recognised by the South African Research Chair of Inclusive Cities (SARChI) which led to her being awarded a scholarship with her thesis being funded by the National Research Foundation (NRF).

The study findings indicate that representation is about more than simply making faces and bodies visible - it’s about making experience evident. To promote inclusion, people’s experiences must be shared and tracked through urban design.

Rampaul argues that the answer to creating inclusive urban public spaces that are accessible and safe for all members of society is good design and community dialogue. ‘Women’s experience and understanding of urban environments varies from men’s, and these disparities must be considered when planning and designing areas,’ she said.

In the framework of her case study, Warwick Junction Urban Renewal Project, the project’s informal traders, most of whom are women, were involved in the planning and design of the project. Using an intersectional gendered perspective, the market area’s conception and design were informed by women’s distinct experiences, needs and concerns.

‘To establish gender equal urban spaces and cities, women must make decisions about urban design. A gender balance is required to develop gender equality and establish inclusive, safe urban spaces that represent the needs and desires of not only women but the entire community,’ she said.

Rampaul confesses that the pandemic had made her nervous. ‘I was entirely absorbed in my assignments, exams and my dissertation proposal, until the day the academic year was unexpectedly cut short and strict lockdown measures imposed - then reality set in,’ she said. Her data collection was not going to happen as planned because of social distancing and she had to work online.

The freedom to conduct her research from a feminist planning perspective was the highlight of her study. Other highlights of her final-year included co-authoring South African Destination among African Women Immigrants, a chapter published in a book titled: Immigrant Women’s Voices and Integrating Feminism into Migration Theory, and having an article titled: Engaging COVID-19 in South Africa through a Gender Lens published by the Centre for Housing and Sustainable Development at the University of Lagos.

She strongly believes her research will have a direct impact on improving existing perceptions about inclusive public urban spaces and their design.

She thanked her family for their understanding and encouragement as well as her supervisor, Professor Hangwelani Magidimisha, for invaluable advice during her studies.

Rampaul had this advice for master's and PhD researchers: ‘You must concentrate on your short-term and long-term goals and assess where your studies lead you; keep your target in sight and stay on track even when things get difficult or when a global pandemic strikes.’

Rampaul is currently working at Zimanga Urban and Rural Design and is a student researcher for the South African Chair of Inclusive Cities (SARChI).

Her long-term goal is to earn a PhD in the built environment.