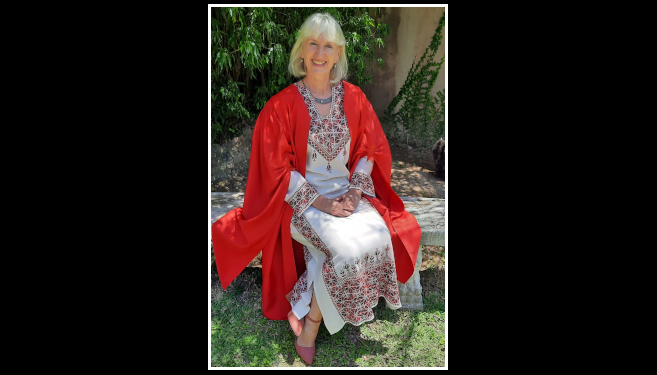 Dr Cherry Muslim dons a thobe to celebrate her graduation.

For her doctorate in Religion and Social Transformation, UKZN academic Dr Cherry Muslim researched how digital activism can challenge and create dominant perceptions about Muslim women on social media.

Muslim, who donned a thobe (a hand-embroidered Palestinian ankle-length, long-sleeved garment outfit worn by women on formal occasions) as part of her Graduation celebration, said: ‘For me, the thobe is symbolic of female activism against all forms of political, religious and gendered violence. It was given to me as a birthday present a few years back and I kept it to be worn specifically for my Graduation.’

Her research explored the cyber-activism of human rights activist Asmaa Mahfouz, who is thought to have sparked a mass uprising through her video blog post a week before the start of the 2011 Egyptian Revolution.  Muslim’s research aim was to provide evidence that participatory online culture, specifically within the context of YouTube comment culture, can create positive perceptions of Muslim women in cyberactivism.

‘Drawing on a decolonial Islamic feminist lens, the study revealed that while, to some extent, gendered and colonial stereotypes of Muslim women persist in online spaces, predominantly positive perceptions of Muslim women were realised through Mahfouz’s varied Islamic-feminist strategies,’ she said.

‘The early stages of my study were particularly difficult as the research should have been a case study through interviews with Mahfouz, however, two years went by with no success in getting to speak to her.’ Muslim was then advised to use social media and Mahfouz’s blog to collect the necessary data.

Muslim says it is necessary to put in the effort and do the work to mature as a researcher. During her studies she learned about how much research is being done globally on social media and through online/virtual research platforms.

The COVID-19 restrictions on live interaction gave her some time to work on her research without disruptions.

She thanked her family, friends, and her supervisor for their support. ‘My supervisor had faith in my abilities and my PhD coach was just amazing, without her I would have been stranded.’

Muslim plans to continue lecturing and growing her research in the area of Islam and digital religion, as well as mentoring future postgraduate students.

She advised master's and PhD candidates ‘to avoid procrastination, write more and to record where every single bit of information comes from.’