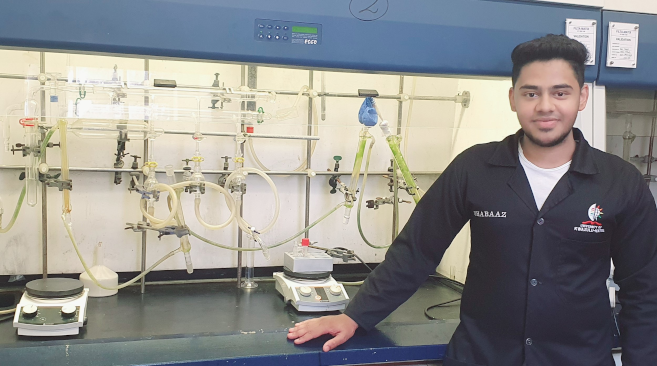 The COVID-19 pandemic had many of us feeling down, but Mr Shabaaz Abdullah used his down time to take a break from his laboratory work and focus on research.

His master’s study focused on designing and formulating anti-cancer pharmaceuticals using the metal rhenium and organic moeties that were found to be potent against cervical and breast cancer cell lines.

His research project was funded by the Nuclear Technologies in Medicine and Biosciences Initiative (NTeMBI), which is managed by the South African Nuclear Energy Corporation (Necsa) and supported by the Department of Science and Innovation.

Abdullah enjoyed his academic journey and learned that chemical reactions are subject to trial and error; thus much effort goes into developing, optimising, analysing, characterisation and elucidation of the final product.

He was also involved in supporting and developing young scientists, which taught him patience, meticulousness and leadership.

As a part of his studies Abdullah completed the Necsa Induction and Radiation Worker training courses as well as the subsequent examination. He received promising feedback from the NTeMBI stakeholders and during his second research visit, will conduct radiolabelling studies which can be advanced to in vivo radiopharmaceutical studies.

Abdullah is thankful to his parents for teaching him how fruitful it is to work with one’s hands. He thanked his supervisors, Professor Irvin Booysen for his guidance and assistance and the Booysen Research Group for their friendship, support and the experience; and Professor Matthew Akerman for his advice.

Booysen said Abdullah is an analytical thinker who conducted his research activities enthusiastically.

Moving forward, Abdullah aims to work in the chemical industry, which is his greatest passion. He aspires to open his own business one day to handle the safe logistics of all forms of refined chemicals.