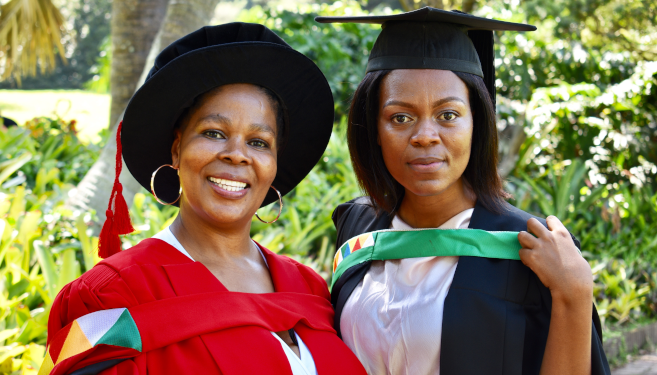 Mother and Daughter Own the Graduation Stage Together

It’s a family affair for Dr Dumile Gumede, née Mkhwanazi, and Ms Lindelwa Msweli as the mother and daughter celebrate their PhD in Health Promotion and MSc in Ecological Sciences, respectively.

The journey to her PhD has been long for Gumede. Originally from Mtubatuba she enrolled at the then University of Natal in 1994 to study a BSc on a student loan. However, academic exclusion and falling pregnant with Msweli led her to drop out.

Gumede did not let academic exclusion and the associated stigma prevent her from pursuing her dreams, and she re-enrolled four years later as a part-time student in Community and Development Studies at the University’s Open Learning Network while caring for her daughter and paying off her student loan.

Gumede found work with the Africa Health Research Institute (AHRI) as a field worker in Mtubatuba and through this and the mentorship of the AHRI’s Dr Kobus Herbst, her interest in the field of health was sparked. During her studies, she was awarded a fellowship to attend a two-month summer school on survey research techniques at the University of Michigan - a life-changing experience for Gumede, who was the only undergraduate student selected for the fellowship.

Completing her degree and her selection for an overseas fellowship provided a sense of fulfilment for Gumede, and shaped her relationship with her daughter and how she guided her.

Gumede spent several years with the AHRI before moving on to other organisations to bolster her experience, working with government, non-governmental organisations and the private sector. She completed her master’s through UKZN. Realising that research was the best fit for her, she ended up as a lecturer at the Durban University of Technology’s (DUT) Centre for General Education.

‘I enjoy seeing the younger generation critically interrogating who they are and thinking deeply about themselves and what they want to be. My own journey shaped my teaching philosophy and commitment to assisting students to achieve academic success,’ said Gumede.

Gumede’s early experiences came full circle with her PhD as she worked with the AHRI for her doctoral research. Under the supervision of Professor Anna Meyer-Weitz, she investigated inter-generational family relationships between grandparents and their adolescent grandchildren in a rural community in KwaZulu-Natal where HIV prevention interventions were implemented.

Gumede has applied for a postdoctoral research grant to investigate how first-year experiences shape the self-care practices of DUT students from grandparent families in the COVID-19 era.

Family support was vital to Gumede, who is mother to Msweli and her two siblings, with Msweli providing some insight into the University system as a full-time student. Strong mentorship was important in her journey, and she thanked Professor Janet Seeley at the London School of Hygiene and Tropical Medicine, and her husband and Msweli’s father Dr Siphiwe Gumede, an acting senior director at Mangosuthu University of Technology’s Teaching and Learning Development Centre, for their invaluable support and guidance. He is also a doctoral graduate of UKZN, having completed his PhD six years ago.

Inspired by her father’s career and by growing up in Mtubatuba near the iSimangaliso Wetland Park, studies in the natural sciences were always Msweli’s goal.

While she initially considered studying in Cape Town, Msweli was accepted in Life and Environmental Sciences at UKZN and with her mother based there at the time, she found herself studying in Pietermaritzburg.

Despite excelling at high school, the university environment was a challenge for Msweli and she had to step up her efforts. After completing her degree, and encouraged by her mother, she took up an opportunity to assist postgraduate students in the laboratory of Professor Colleen Downs, South African Research Chair in Ecosystem Health and Biodiversity in KwaZulu-Natal and the Eastern Cape.

After a semester as a research assistant, an opportunity arose to pursue honours studies funded by Stellenbosch University’s Centre for Invasion Biology. Her honours research became a pilot study for what she went on to research for her master’s degree: the effects of indigenous and exotic Southern African ungulates on seed dispersal and germination of alien invasive fruiting plants, supervised by Downs.

This work filled a gap in knowledge of dispersal of invasive alien plants by southern African ungulates. From her research, she published a book chapter with Downs and Dr Christophe Baltzinger of the Research Unit Forest Ecosystems in France.

Mentorship was as important to Msweli’s career as it was to her mother’s, with Downs filling a similar role to that Herbst played for Gumede, and she also thanked co-supervisor Dr Manqoba Zungu for his guidance and support.

Msweli is progressing to PhD studies in UKZN’s Centre for Functional Biodiversity on the urban ecology of rock hyrax in urban areas in KwaZulu-Natal.

She said that graduating with her mother is a blessing from God.

‘Everything I am is because of my family; they are a gift from God and no one knows me as well as they do,’ said Msweli. ‘My mother taught me to be a go-getter and to identify opportunities, and instilled a strong work ethic and resilience.’

Both Gumede and Msweli experienced loss on their way to their degrees; Gumede’s father died shortly before she completed her undergraduate studies, and Msweli’s grandmother passed away while she was an honours student. Both women attributed their achievements to the influence of these late family members. A spiritual family, they said their prayers and encouragement of one another have also shaped their success.