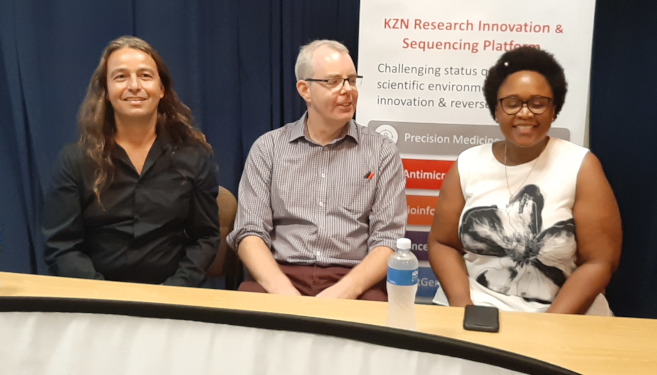 SARS CoV-2 variants, including the 501Y.V2 first identified in South Africa, were under the microscope in a webinar debate organised by UKZN’s College of Health Sciences.

The deliberations started with the mapping out of the current state of the global COVID-19 pandemic, followed by outlining the terminology and taxonomy used for SARS CoV2.

When asked about the driving force behind the emergence of new COVID-19 variants, Professor Tulio de Oliveira of the KwaZulu-Natal Research Innovation and Sequencing Platform (Krisp) said: ‘Although it is not really known what drives the emergence of variants around the world, one hypothesis suggests that intra-host immunosuppression could be responsible for three main variants that were discovered in South Africa and the United Kingdom and initially in Japan, but were linked back to Brazil.’

De Oliveira is leading the Network for Genomics Surveillance in South Africa (NGS-SA) which has been credited with identifying the South African variant 501Y.V2.

Msomi outlined how the various virology diagnostic laboratories and research institutions including NHLS, NICD and Krisp joined forces to form the genomics surveillance network. ‘Although this was implemented for SARS CoV2 surveillance, it can be used as a crucial surveillance tool for detection and control of any emerging infectious disease in the future,’ said Msomi.

Infectious diseases specialist at UKZN Dr Richard Lessells warned that a slow vaccine roll-out could mean the emergence of more variants as the virus could thrive if there was sub-optimal vaccine coverage resulting in ‘selective pressure and vaccine escape.’

‘There will be selective pressure on the virus since some people would be vaccinated and others not so as the virus spreads across the population we will see more variants with the capacity to evade the immune response from the vaccines,’ he said.

The three scientists agreed that South Africa could control COVID-19 transmissions through a vaccination programme which while being rolled out could create population immunity thus reducing the risk of further mutations and transmission of infections.

Although the country recently passed the peak of a second wave of infections, the scientists warned of a possibility of another surge in the winter months.

Responding to questions from webinar participants about the epidemic’s trends in South Africa, de Oliveira said it was critical for new transmissions to be controlled.

‘We know the South African epidemic was the highest in Africa,’ he said. ‘The 501Y.V2 variant was associated with higher transmissibility which drove the high numbers of infections, especially in the second wave. Fortunately, this variant was not associated with higher pathogenicity such as the 501Y.V1variant identified in the UK. The best way to control the epidemic is to find and use vaccines that are effective against the circulating variants.’

Lessells said scientists should consider having a range of vaccines, each targeting a different strain of the virus.

‘We’re reacting to what we’re seeing now. By the time we’ve developed those modified vaccines the virus could have evolved further if we have allowed it to. We need to develop different types of vaccines not just targeting the spike protein but also the different parts of the virus that are maybe less prone to the mutations we have identified,’ added Lessells.