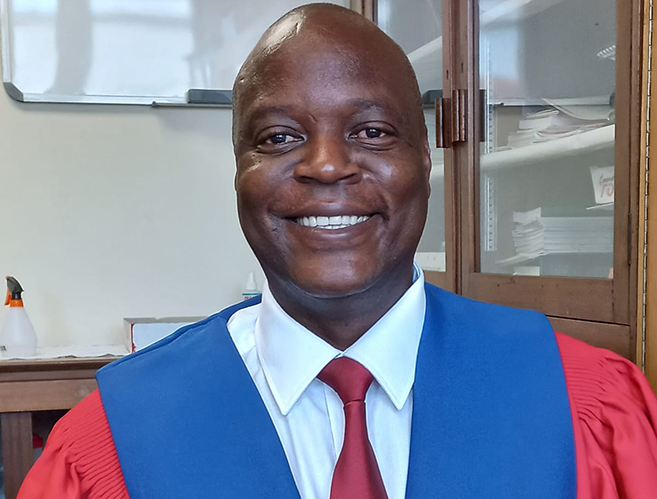 Dr Vincent Nyamori joined UKZN’s Westville campus Chemistry staff as a young lecturer in 2008, fresh from a two-year term as a postdoctoral research Fellow at the University of the Witwatersrand.

Fast forward to 2021, and Nyamori has now been inaugurated as a full professor at UKZN and delivered his inaugural lecture!

Nyamori hails from Kenya where he graduated with a BSc degree in Physical Sciences from Egerton University in 1996 before moving to the University of Port Elizabeth to pursue a BSc Honours degree in Chemistry (1999), followed by an MSc (2001) and PhD in Chemistry (2006), awarded by the Nelson Mandela Metropolitan University.

Since joining UKZN as a lecturer, he has risen rapidly through the ranks. ‘Vincent has contributed enormously to the running of the School and Institution,’ said Dean and Head of the School of Chemistry and Physics, Professor Ross Robinson.

‘He has been an active member of many committees within UKZN. Among other responsibilities, he took on the role of Academic Leader of Analytical and Physical Chemistry in 2012 and has co-ordinated the UKZN Nanotechnology Platform since 2014.’

In 2011, Nyamori was awarded the Vice-Chancellor’s Research Award, and in 2018, he was named among UKZN’s Top 30 Published Researchers.

Last year he received the Merck Medal which is awarded to a senior author of a paper published in the South African Journal of Chemistry in a specific field of chemistry and which is adjudged to have made the most significant contribution to the Discipline in a specified period.

In recognition of his research activities, he was made a Fellow of the Royal Society of Chemistry (UK) in 2019 and a Fellow of the South African Chemical Institute (SA) in 2020.

Nyamori, who served as president of the South African Chemical Institute from 2017-2019, was the Chair of the Organising Committee for the NanoAfrica conference held at Salt Rock in 2018 and the Chair of the Local Organising Committee of the 5th International Union of Pure and Applied Chemistry (IUPAC) Green Chemistry Conference held in Durban in 2014.

He is currently Chair of the Scientific Organising Committee for the Commonwealth Chemistry Congress being held in Trinidad and Tobago next year.

Nyamori has supervised 11 PhD and 12 MSc candidates to graduation, and is currently supervising a further 11 PhD and three MSc students. He has published 136 peer-reviewed articles, two book chapters and one patent, and has over 2 199 citations to date.

Nyamori used the occasion of his inaugural lecture to focus on ferrocene and green chemistry, and his interest and contribution to the research field of nanotechnology for sustainable development.

‘Advancements in nanotechnology are helping considerably to improve, even revolutionise, many technology and industry sectors,’ said Nyamori. ‘These innovations, coupled with sustainable chemistry, are at the heart of addressing the United Nations 17 Sustainable Development Goals (SDGs).

‘Carbon-based nanomaterials, and their composites, have played a key role in shaping and providing directions to the SDGs, particularly in the case of provision of clean water, a healthy environment and sustainable energy technologies for an ideal modern smart city.

‘Our contribution has entailed synthesising ferrocenyl derivatives by an alternative greener approach, under solvent-free conditions. These ferrocenes have been used in the synthesis of shaped carbon nanomaterials.

Nyamori concluded his lecture by thanking all those who had supported him during his exciting journey.

Deputy Vice-Chancellor and Head of the College of Agriculture, Engineering and Science, Professor Albert Modi, thanked Nyamori for his rich contribution to the University.