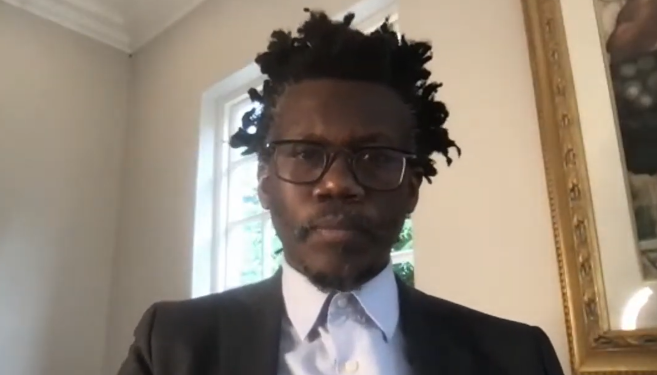 Advocate Tembeka Ngcukaitobi SC delivering his address on the rule of law in times of crisis following the July unrest.

A webinar delivered by Advocate Tembeka Ngcukaitobi, SC was the first of a two-part webinar on the theme of Things Fall Apart? The Rule of Law in Unprecedented Times hosted by UKZN’s School of Law under the auspices of the Navi Pillay Research Group (NPRG). It aims to stimulate debate on incitement to violence, public disorder, vigilantism, racism and social cohesion. Associate Professor at UKZN’s School of Law, Professor Aifheli Tshivhase moderated the session.

In her welcome address on behalf of the Dean of the School of Law Professor Managay Reddi, Law academic Ms Willene Holness said that over the past few months, members of the NPRG in the School have debated how to start working towards building respect for the rule of law and the legitimacy of the state.

‘We aim to address divisions including in the police prosecutorial services and the criminal justice system as well as intelligence areas. We seek to promote accountability and justice for incidents of incitement to violence, vigilantism and racism. We are deeply aware of the socio-economic context in South Africa, which is extremely unequal, as well as the pressured political context of our times.’

‘This is a tremendously important topic and an intimidating one to tackle. In July 2021, our judges and the rule of law were put to the test. The case was the Zondo Commission versus Zuma. Intimidation and threats of violence were directed at individual judges. The rule of law, held sway and the order of the Constitutional Court was carried out. State institutions performed their job,’ said Ngcukaitobi.

‘We should examine how judges ought to respond to these for the rule of law to thrive. What is the rule of law? How might it unleash the emancipatory forces of politics and what are its constraints?’

Ngcukaitobi added that people should be skeptical about what is debated in the public arena and what politicians proclaim “in the name of the public”.

The seminar can be viewed here: https://www.youtube.com/watch?v=bSAFQkDTOmc