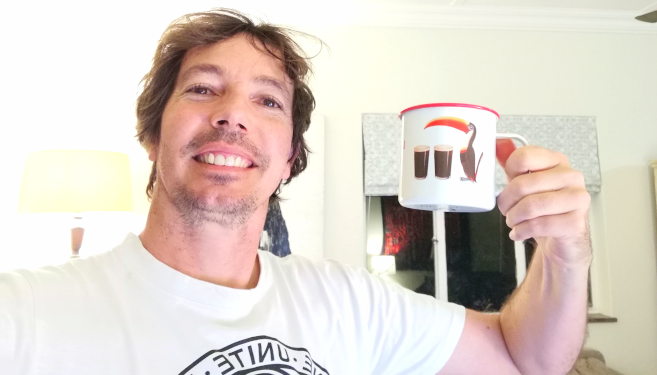 The inaugural lecture of Professor Andrew Green, Head of the Marine Geology Research Unit in the School of Agricultural, Earth and Environmental Sciences (SAEES) comprised a fascinating exploration of the development and current state of South Africa’s place in global marine geoscience.

Titled: From Coelacanths to Crocodiles: Renewing South Africa’s Place in Marine Geoscience, the lecture set the scene of marine geology in South Africa, including the rediscovery in submarine canyons off Sodwana Bay of the coelacanth, thought to be extinct, that launched South African research into marine geology in the early 2000s.

Welcoming guests, Deputy Vice-Chancellor of the College of Agriculture, Engineering and Science Professor Albert Modi said inaugural lectures - which represent official recognition of promotion to full professor - present an opportunity to showcase the exciting and ground-breaking research and teaching being carried out by professors at UKZN to a wide audience.

‘[Green] has established a growing team of postgraduate students that have cemented UKZN as a key contact point for marine geology in Africa,’ said Dean and Head of SAEES Professor Fhatuwani Mudau.

Green traced his career, UKZN’s growing influence in marine geology through its pioneering research, including improved understanding of the continental shelf and seabed, and the self-sufficiency of its capabilities in terms of having secured a comprehensive suite of marine geophysical equipment.

‘Globally, marine geology is recognised as the fundamental basis around which we construct our knowledge of marine biology or oceanography, but unfortunately in South Africa this is not the case. We are hoping to change that.’

‘[UKZN is] the cornerstone for the growth of African marine geology, and hopefully across the oceans to our neighbours in Australia and South America,’ said Green. ‘Our research is not just centred on South Africa … a good indicator of the health of the science that is coming out of our Unit.

‘What we’re interested in are the rocks and sediment of the seabed and how they document critical things such as sea-level change, climate change, and oceanographic change, from the short-term all the way through, to many millions of years, [as well as] how the deposits left behind make their way into the ancient rock record,’ he said.

‘If we can look at the past and understand how things like coastlines responded to major changes in sea level, we can perhaps infer how things may respond in the future, something particularly important in the context of anthropogenic climate change.’

UKZN is taking marine geological research beyond the academic realm; a partnership with Namdeb Diamond Corporation involves examination of changes in sea level while factoring in economics, since the sea level history of the area influences the economic grades of diamonds found there. Working alongside industry provides exposure and opportunities for graduates.

Other partnerships include one with International Mining and Dredging Holdings, which is also applying marine geophysics and local knowledge of sea-level changes to the search for diamonds off the shores of South Africa and Namibia.

Green’s geological work includes examining the fate and evolution of ecologically significant water bodies like Lake St Lucia, and mapping submarine canyons like Mzumbe canyon - the only other location where a live coelacanth was spotted outside of Sodwana Bay.

Green holds a B2 rating from the National Research Foundation, placing him amongst the top 30 researchers in geosciences in South Africa, and the top in marine geology. He started working at UKZN, his alma mater, in 2010, and has focused his research on the morphology and sedimentary building blocks of coastal and shelf systems.

With 87 publications to his name, and six PhD and 13 master’s students graduated, Green is actively contributing to furthering the field of marine geology, in which South Africa lacked academic expertise when he began his research career. His productive research unit is the only one of its kind in the country and it attracts students and collaborations from across the continent and the world.

Green participated in the Fulbright Visiting Research Scholar Program to the United States in 2018, and in 2019 was awarded the Africa Award for Research Excellence in Ocean Sciences by the American Geophysical Union. He is an advisory board member for the International Union for Quaternary Research and the Atlantic/Indian Ocean representative for the Nippon Foundation/GEBCO Seabed2030 project. He was until recently the editor in chief of the international journal Geo-Marine Letters, and remains an associate editor of the journal Marine and Petroleum Geology, and a review editor for Frontiers in Marine Geosciences.

Green acknowledged mentors Dr Peter Ramsay, and Professors Andrew Cooper, Joe Kelly, Burg Flemming, Edward Anthony and Steve McCourt, and extended special thanks to his parents, wife and son, finally thanking his postgraduate students and colleagues for their excellent contributions to all aspects of the work of his Unit.