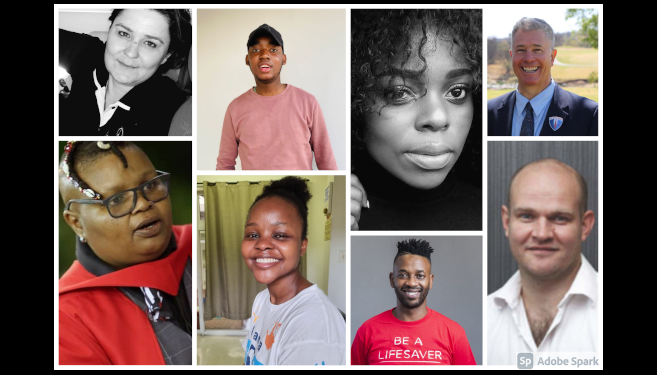 Cuppa for CANSA - Celebrating the Lives and Strength of Survivors

UKZN partnered with DKMS Africa (formerly The Sunflower Foundation) for the fifth-year running to host Cuppa for CANSA. This year’s event was titled: Cuppa for CANSA - Celebrating the lives and strength of survivors and how you can help.

Breast cancer survivor Ms Loriana Trisolino delivered a talk titled: My Journey as a Breast Cancer Survivor. Trisolino’s journey started with extreme pain in her left thigh and hip. After numerous tests and procedures including biopsies, MRIs, mammograms and CTI scans, she was diagnosed with breast cancer. ‘It’s a life changing event - whether we are survivors or are still going through it,’ she said. Trisolino encouraged regular mammograms and having hope and faith. She paid tribute to her family, doctors, friends and her mentor/boss.

She had these words of encouragement for other cancer survivors: ‘The stage of your cancer is not what defines you. It is your mind-set - know that there is hope and there is support. Keep the faith.’

Grade 12 student and cancer warrior Mr Axola May spoke about his journey after being diagnosed with severe aplastic anaemia in early 2021. The matric student experienced nose and gum bleeds, fatigue and pain from September 2020 and started having painful headaches in December while on a trip to Cape Town. ‘I didn’t pay much attention to it, but as time went by, the symptoms became worse and worse,’ he said. After returning home, the 16-year-old went to a clinic and was immediately referred to a doctor.

He went to Greys Hospital where he was given a blood transfusion and then spent about a month at Cecilia Makiwane Hospital before being diagnosed with aplastic anaemia. ‘I was a bit scared and shocked because I didn’t expect that, but as time went by, I was positive that everything would be better, hopefully soon.’ Axola has received blood platelets, more blood transfusions, bone marrow transplants and chemotherapy as part of his treatment regime.

Axola’s aunt and guardian, Ms Bomikazi May shared an inspiring and heartfelt reflection on parenting during difficult times. ‘It’s been a whirlwind of emotions. Psychological and mental adjustments had to be made. You are never ready as a family to get such a diagnosis. You are never ready to be told that your child, your loved one, has a life-threatening disease.

‘Remember that blood disorders and cancer are almost taboo in Black society. As Black people, I feel that we are oblivious to the fact that these diseases exist amongst our society. These kinds of things are not colour based or gender based - it can happen to anyone at any time,’ she said.

She made an impassioned plea to everyone eligible to register as a donor. ‘This is me reaching out to everyone and anyone who can assist Axola to get a donor. He’s a 16-year-old, he is starting off his life, he has dreams, he has a future. I don’t think any 16-year-old is ready to be told or wants to be told that you have this disease, and it’s a life-threatening disease. I just want him to live and experience moments that he probably would not have experienced before.’

May paid tribute to Axola’s positivity and faith in his journey and thanked DKMS for their support in looking for a donor.

Managing Director of the Men’s Health Association and CEO of the Prostate Cancer Foundation of South Africa Mr Andrew Oberholzer delivered a presentation titled What every man needs to know about Prostate Cancer. Oberholzer outlined the risk factors for prostate cancer, ‘The Prostate Cancer Foundation recommends screening from age 40 for Black men, men with a history of prostate or breast cancer in a first degree relative and men who have been diagnosed with lower urinary tract infections. For all other men, we recommend that they consider screening from the age of 45.’

Oberholzer explained that there are generally no symptoms of prostate cancer in the early stages. ‘Early detection saves lives as with all cancers,’ he said.

Clinical Haematologist Dr Theo Gerdener discussed treatment for blood cancers and the principles and practicalities of stem cell transplantation. Defining cancer, Gerdener said, ‘Cancer is an uncontrolled growth or proliferation of cells that are unresponsive to the regulatory elements in the host environment.

He said that treatment principles for haematological malignancies include chemotherapy, radiotherapy, and a huge field of biological agents/targeted therapies.

Speaking about stem cell transplantation, Gerdener said: ‘Whereas we have previously said that cancer is a failure of the immune system, a transplant is an effect way of replacing that immune system with a new one that will kill off the cancer.’

DKMS’s Mr Xolani Hlongwane spoke on behalf of the Executive Director of DKMS Africa Ms Alana James, who experienced technical difficulties. Hlongwane emphasised the importance of convincing as many people as possible to join the blood stem cell register. ‘Our greatest challenge is that we are seeing a rise in the number of patients diagnosed with blood diseases, but we are not necessarily seeing the same growth in terms of donors who are registered to help these patients.

‘We’d like to grow a very healthy, ethnically diverse registry to be able to afford all our patients in South Africa a second chance at life,’ he said.

The Regional Coordinator of the Childhood Cancer Foundation of South Africa (CHOC) Ms Ntobeko Zama looked at the statistics of children with cancer. Zama said that, while an estimated 1 800 to 2 200 children should be diagnosed with cancer in South Africa annually, only about 50 percent of those children are diagnosed and getting the treatment that they should. ‘Concerns are that the rest of those children are dying undiagnosed,’ she said. ‘In developed countries, the survival rate is 80 to 90 percent. Yet in South Africa, the survival rate is 55 percent. The sad part is that children are dying as a consequence of where they were born.’

I - White spot in the eye, new squint, sudden blindness or bulging eyeball

A - Aching bones, joints, back and easy fractures

N - Neurological signs, a change in walk, balance or speech, regression, continuous headaches with / without vomiting and enlarged head

Looking at some of the myths surrounding childhood cancer, she emphasised that cancer is not contagious and that Black children are susceptible to cancer.

UKZN event co-ordinator Ms Shakila Thakurpersad, who has organised the UKZN CUPPA for CANSA event annually (even before her diagnosis) is a breast cancer survivor. She was diagnosed in April 2018 after a routine mammogram, has beaten cancer and is now cancer free. She stressed the importance of early detection and encouraged women to go for regular screening: ‘Breast cancer is sometimes found after symptoms appear, but many women with breast cancer have no symptoms. This is why regular breast cancer screening is so important. Cancer CAN be beaten.’

Acting Director for University Relations Ms Hazel Langa echoed the importance of testing and early detection in fighting cancer - especially as many have skipped medical tests due to the onset of the COVID-19 pandemic in 2020. She thanked everyone who contributed to the highly informative session and promised further talks to delve deeper into the topic.

To view the webinar, visit: https://www.youtube.com/watch?v=1fB3ifCEmjI