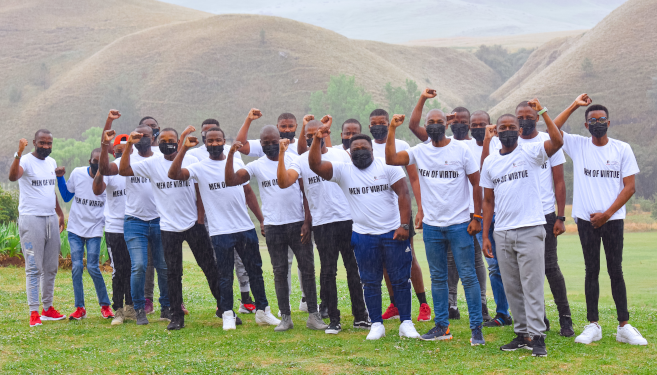 Some of UKZN’s Men of Virtue.

On 2 October, the Residence Life Office in the Department of Student Residence Affairs, in collaboration with the Commission for Gender Equality hosted a panel discussion titled: Becoming Men of Virtue. Under the slogan, Pro Women is Not Anti-Men, Man up! Silence is Violence, the event aimed to eradicate gender-based violence, femicide and gender inequality by educating UKZN men.

Sponsors iMaswi and the Ayanda Msweli Foundation ensured that the event was a success and all guests received a gift bag as well as an Umqhele (Crown) that they wore during the event, symbolising men of virtue.

Ms Qhamo Gumede, a student development practitioner who organised the event, welcomed all present, including Professor Albert Modi, Deputy Vice-Chancellor of the College of Agriculture, Engineering and Science and Interim Executive Director: Student Services, Emeritus Professor Fikile Mazibuko, who participated through YouTube. ‘Our responsibility is to develop students holistically and organise staff development programmes,’ she said. Gumede further said, Men of Virtue was going to be included on the 2022 UKZN Residence Life Curriculum and she encouraged academic staff to follow suit.

In his address, Modi focused on what is expected from men in society. ‘At the centre of what we want to do as leadership is to eradicate inequality,’ he said. He added, ‘This is the first event of its kind at UKZN since I’ve been at the University. On behalf of the UKZN leadership, I extend our congratulations to Qhamo for organising it.’

Facilitator, lecturer in Economic History and development motivational trainer Dr Maserole Kgari-Masondo began by singing Madoda Lalela, encouraging audience members to join in and getting them involved in fun activities with everyone using their crowns as a metaphor for her message.

Lecturer at the Durban University of Technology and Project Manager for the Imbali Education and Innovation Precinct Mr Mfanozelwe Shozi spoke on what it means to be a man of virtue in the 21st century. He highlighted the need to improve moral standards in society, and the importance of a good upbringing. He also discussed the impact of apartheid and the post-apartheid era, and concluded with a discussion on the benefits of social media.

UKZN Residence Life Co-ordinator Mr Thabani Chagi presented his views on what virtue is and what it means to practice it as a man. ‘How did we get to this point where we became so morally bankrupt that it became the duty of the law to police us and to shape us as we seem to be fragmented?’ he asked.

Acting HOD: Department of Public Education and Information Mr Rubbuh Raletsemo focused on working with men and boys to promote gender equality and on sexual harassment, bullying and feminism. He noted that ‘ending violence has benefits for both men and women.’

Senior lecturer in Social Work Dr Maud Mthembu took up the issue of healing men from the inside, coping with childhood trauma and deep-seated pain. ‘Many children don’t have access to therapy and counselling to help them cope with their emotions and to develop emotional resilience,’ she said.

A Q&A session followed, with attendees engaging with members of the panel.

Modi closed the event with a candle lighting ceremony, and Acting HOD: Department of Student Residence Affairs Mr Thoba Mthembu presented the vote of thanks. He expressed sincere thanks to Gumede for organising such a successful event and highlighted the difference between being a confident man and an arrogant one.