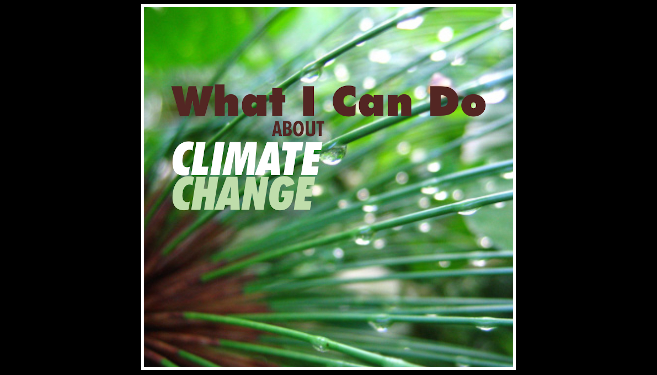 The Durban office of the International Panel on Climate Change Working Group II Technical Support Unit has produced a booklet - titled: What I Can do about Climate Change.

The work of the Intergovernmental Panel on Climate Change (IPCC) recently received global attention following the release of the first part of its Sixth Assessment Report from Working Group I on the physical science basis for climate change.

This Durban office of the WG TSU II, launched in 2018, supports South Africa’s first IPCC Co-Chair Professor Debra Roberts, who was elected together with Professor Hans Otto-Pörtner of Germany to oversee the development of the Working Group II report. Roberts, the acting Head of eThekwini Municipality’s Sustainability and Resilient City Initiatives Unit, brings a unique perspective to the IPCC, marrying global science with local practice.

Roberts is supported by two science officers, Dr Andrew Okem and Dr Marlies Craig, and two postdoctoral researchers, Dr Michelle North and Dr Nina Hunter, who add value to the office through the production of climate change related knowledge for Africa and cities. They have produced publications in Earth-Science Reviews and Environmental Science and Policy on the underrepresentation of African authors in high-impact geoscience literature and the marginalisation of African perspectives in the fight against climate change respectively, and a systematic map of responses to climate impacts in urban Africa in Environmental Research Letters.

In 2021, the team has focused on its internal mandate of convening and supporting authors of the assessment reports, but has also undertaken projects to communicate knowledge about climate change to a wider and non-academic audience, and encourage prospective authors to contribute to the work of the IPCC.

A major achievement for 2021 was an Africa-wide outreach event, targeted at policymakers, the media and academia. The first time the IPCC has undertaken such targeted regional messaging. The virtual events were held in French and English and presented important Africa-specific messages from the three Special Reports of this assessment cycle: 1.5oC of global warming, oceans and frozen areas, and land.

The Durban office played a critical role in distilling the messages that formed the basis for this outreach and compiled the content into a booklet, available on the website.

Another major achievement has been the production of a booklet titled: What I can do about Climate Change, with a focus on local, personal climate action to encourage individual South Africans to reduce their carbon footprints. Providing examples for eThekwini Municipality, the booklet is freely available on the WGII TSU’s website, and is a useful tool for individuals, organisations and institutions seeking to identify personal response options to climate change.

According to Roberts and Craig, materials like the booklet are practical, accessible tools for improving the communication of knowledge, adding value to both science and society by using research to inform action and policy.

‘We urgently need transformative change, because the changes we are experiencing are entirely unprecedented,’ said Roberts. ‘It needs the whole of society to respond, and society is made up of individuals. A lot of attention in the IPCC world is focused on policy and decision makers, but we’re all policy makers and decision makers in our own homes, and we’re hoping to empower that level of decision maker to play their role.’

‘The IPCC targets the national level but doesn’t touch some areas of policy, so we are trying to use outreach and products like the booklet to bridge the gap and make this information accessible,’ said Roberts. ‘You cannot call on society to respond if you don’t give them access to information on which to base their decisions, and with which to hold their decision makers accountable.’

Informed by the three recent IPCC Special Reports, as well as other sources, the booklet is an accessible source of information to inspire effective individual action and stimulate conversations about what needs to be done to slow down or even reverse climate change.

Other work that the unit has prioritised, despite limitations imposed by COVID-19 restrictions, has been interacting with a network of African scientists to introduce the work of the IPCC during the German Academic Exchange Service’s climapAfrica IPCC Insight Series. The team spoke to around 40 postdoctoral researchers across Africa about the results of the three AR6 Special Reports, and about the structure and processes of the IPCC and opportunities for young African scientists to get involved.

Over the coming months the office will continue to assist in the finalisation of the main assessment report for this IPCC Working Group, and work towards successful communication of crucial messages to as wide an audience as possible.