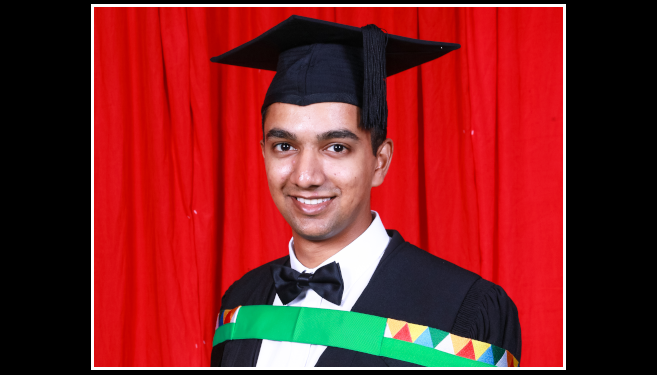 Master’s student in Chemical Engineering Mr Ethan Hammond recently took part in the IBM Quantum Challenge Africa 2021 where, with the aid of the Python programming language, he and 464 other participants used the Qiskit quantum library to solve real-world problems in the fields of optimisation, finance and chemistry.

Qiskit is a quantum software library used to programme and simulate IBM’s quantum computers. The IBM Research Lab in South Africa and the University of the Witwatersrand developed the Africa-focused quantum computing challenge for African students, researchers and industry members.

The two-and-a-half-week challenge was developed by African researchers to grow the continent’s quantum community and quantum skills and did not require any formal quantum computing education. The problems included using a Monte Carlo algorithm to predict call option pricing and molecular simulations to design anti-retroviral treatments for HIV, both run on simulated and real quantum computers that IBM made available.

Hammond found the challenges well thought-out and executed, encouraging experiential learning and introducing the use of brand new code to perform complex tasks.

‘The task using molecular simulation to design an anti-retroviral for HIV treatment was the most interesting for me as I’d wanted to learn to do molecular simulations for a while - I was more familiar with the other general machine learning algorithms,’ said Hammond.

‘Being able to run code that I’d written on an actual quantum computer was somewhat of a dream come true.’

The experience Hammond gained from the challenge has piqued his interest in developing his skills through participation in future challenges.

While he is pursuing his research in Chemical Engineering, Hammond is also a keen programmer. With some exposure to programming in high school, he began working at it in earnest during his studies as a way to earn income through private tuition and programming for a research group at the University. He learns new programming languages when a problem arises that requires them and said this approach had helped him excel in his university assignments.

Engineering is about finding better ways to do things, Hammond says, and programming can similarly simplify life particularly when performing regressions or simulations.

‘If you are able to take on more difficult calculations with programming then you aren’t at all hindered in your engineering design or optimisation because you are able to deal with any mess created with some elegant programming,’ he said.

The enjoyment of finding counter-intuitive solutions led Hammond to study engineering, and to the complex world of chemical engineering, where he describes having to take into account a vast number of variables when tackling any problem. Encouraged to study at UKZN due to the strength of its engineering programmes, Hammond has found that being involved in an intensive programme has demanded lifestyle changes and hard work, but has yielded opportunities for personal growth.

His commitment to his studies earned Hammond several certificates of merit in his final-year, most notably for his final chemical engineering design project.

Research underway in Professor David Lokhat’s Reactor Technology Research Group led Hammond to pursue studies with the group, focusing on using a magnetic field to impact on the way molecules interact with a catalyst. Using the magnetic field, he aims to improve the reaction used by petrochemical companies to obtain liquid fuel products from gasified coal, and designed and fabricated a Helmholtz coil to produce a uniform magnetic field around a bench-top reactor.

‘Improving or contributing to such a world-renowned technology excited me, and presented an opportunity to develop more of my skills,’ he said.

Hammond plans to become a professional engineer, whether as a chemical engineer for an international project house or as a process engineer, and is particularly drawn to contributing to the global challenge of making chemical processes more eco-friendly.