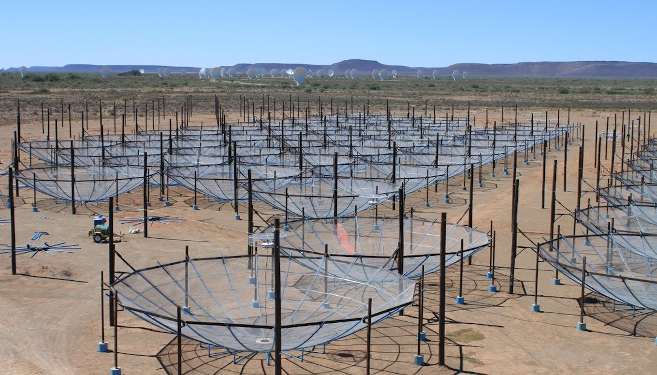 The HERA telescope array in the Northern Cape.

UKZN is part of an international team working on data emerging from the world class Hydrogen Epoch of Reionization Array (HERA) telescope that - with the release of its first set of observations - is providing a glimpse of what the Universe looked like 13 billion years ago!

The HERA network comprises an array of closely packed 14m diameter dishes and 350 antennae situated next to the MeerKAT radio telescope in South Africa’s Northern Cape province, from where it can observe large scale structure in the universe during and before the epoch of reionisation, a time when the neutral intergalactic medium comprised largely of neutral hydrogen atoms was ionised by the emergence of luminous sources, giving rise to plasma, the most abundant form of matter in the universe.

Constructed by a team of local artisans from Carnarvon in the Northern Cape, the sky-facing, state-of-the-art antennae comprise surprisingly simple materials: wooden poles, a PVC-pipe structure and wire mesh. Construction has taken place over the past six years, with observations happening throughout, with completion expected in a matter of weeks. The deceptively simple set-up allows astronomers to peer deeper into the universe than ever before.

HERA is helping astronomers understand how the universe reached conditions for the very first stars and galaxies to form. The radio telescope looks even further back in time than that achieved by leading optical and infrared space telescopes. Scientists from UKZN, Rhodes University and the University of the Western Cape are among the experts interpreting the data HERA produces.

Professor Yin-Zhe Ma of UKZN’s Astrophysics Research Centre (ARC) and School of Chemistry and Physics, whose expertise includes radio cosmology and 21 cm intensity mapping of the scale of the universe in the epoch of reionisation, co-authored one of the papers accompanying the release of HERA’s Phase I data.

Following research revealing the most sensitive upper limits identified to date on the strength of the signal it is possible to detect from the universe at around 66 million years after the Big Bang, Ma and other authors elaborated on the implications of those upper limits for models of early universe star and galaxy formation.

These two papers present clear observational evidence for heating of the intergalactic medium by energy from stars in the epoch of reionisation, and as HERA’s capabilities are extended, the measurement of the very first stars emerging even before this epoch will be possible. As it reaches completion, project engineers are confident that HERA will enable astronomers to observe the birth of the very first stars that appeared after the Big Bang, and investigate the proposed new physics believed to have affected these stars.