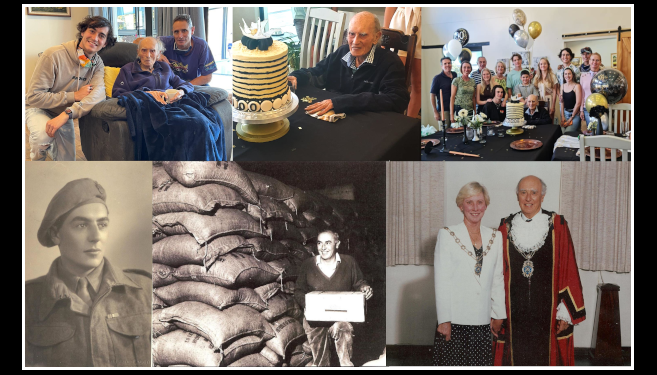 The Bright family is celebrating the 100th year of alumnus Mr William Thomas (Bill) Bright, born on 13 August 1921 to a century of life that saw him joining the Allied efforts in World War 2 and escaping Nazi imprisonment, assisting with the construction of the Sani Pass road service in the 1950s and serving as the Mayor of Howick in KwaZulu-Natal for two five-year terms.

To capture the breadth of his experiences for the benefit of his children, Professor Glen Bright, Mr Martin Bright, Ms Judy van de Langkruis and Ms Sally Hallows, Bright wrote an autobiography titled On Days Like These in 2009.

After attending Durban High School, Bright joined the South African Army’s First Field Engineers in May 1940, training in Zonderwater in Gauteng before boarding the SS Rohna from his hometown of Durban for further training in Kenya. He volunteered for the assault boats carrying the Carbineers infantry across the Juba River in Somalia, and was stationed behind the infantry of the first South African Brigade at Gazala in Libya where his duties included an attempt to detonate an enemy field gun, and blow up a pass to move troops to safety.

His experiences in Italy included the rescue of a fully-stocked champagne factory that was rigged to blow up by the German army, and attending a reception with Pope Pius XII as his company’s representative after Rome was liberated by the Allies in June 1944. Tasks in the liberated Italy included the construction of bailey bridges over rivers and landmine detection.

Towards the end of the war, Bright was captured by the Germans and detained in a Nazi concentration camp in Italy for some weeks. He escaped under enemy fire, sustaining a gunshot wound to the knee for which he was hospitalised once he made it back to Allied lines.

On his return to South Africa after the end of the war, Bright enrolled part-time at the then University of Natal for a degree in Economics while working for the railways in Durban. He was the only student in Economics III and graduated in 1952. He also took flying lessons with the Durban Flying Services.

He moved to Himeville in the late 1950s following his marriage to Sheila, who passed away in January 2020. While living in Himeville, he became involved in numerous activities in Lesotho, including a visit by plane to the Letšeng Diamond Mine, the first crossing of the country by car in a Ford Taunus station wagon and a Land Rover, a contract to transport United Nations World Food Programme parcels to Mokhotlong from Underberg Station via Sani Pass, and assisting in the building of the Sani Pass road service from Underberg/Himeville to Mokhotlong in the 1950s.

Working with two partners to make the pass, until then used only by pack animals, driveable by 4x4 vehicles significantly improved the movement of goods in and out of Lesotho.

When he moved to Howick with his family in the 1970s, Bright was motivated to improve the running of the town for its ratepayers, first becoming a councillor and then serving as Mayor for two five-year terms.

Bright still resides in Howick with his daughter Sally in the home he built for his family on a 12-acre property. He is grandfather to Cameron and William Hallows, Nicholas and Sarah Bright, Tyrone Bright, and Leo van de Langkruis. His sons make Durban their home, while his daughter Judy resides in Switzerland.

Bright is the last surviving member of his army unit.

‘We as a family are certainly in awe of my Dad,’ said Dean and Head of the School of Engineering, Professor Glen Bright.