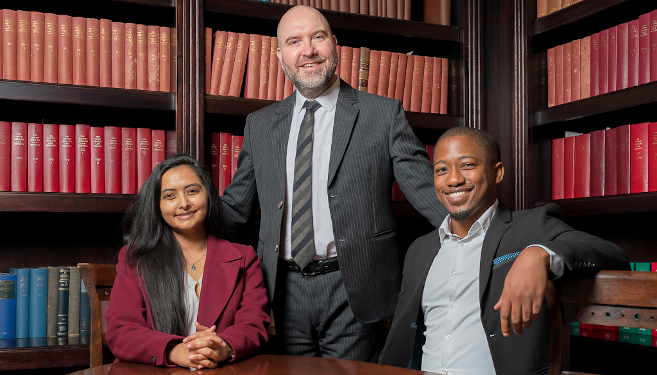 Judgment has been given in a landmark case in the Pretoria High Court during which Professor Donrich Thaldar of UKZN’s School of Law served as an *amicus curiae, enlisting the assistance of postgraduate students Mr Bonginkosi Shozi and Ms Roasia Hazarilall for behind-the-scenes research.

The case QG v CS made South African legal history as it was the first of its kind to consider several key issues relating to artificial fertilisation and parenthood in South African law.

The matter involved a known sperm donor seeking access to his biological son he had helped a lesbian couple to conceive.

After the initial meeting, the parties had concluded a known sperm donor agreement which purported to establish the lesbian couple as the legal parents of the donor-conceived child, while barring the known sperm donor from ever obtaining parental responsibilities and rights. However, after holding the new-born in his arms, the donor knew he had not truly appreciated the profound psychological effect his sperm donation would have on him.

This judgment provided much-needed legal certainty on questions relating to the scope of the provisions, their potential to extend to known sperm donors, and the enforceability of known sperm donor agreements.

Ultimately, in its assessment of the circumstances of the case, the court held that there was no evidence that contact with the known sperm donor would contribute to the child’s best interests. Rather, it could cause confusion and new conflicting centres of focus in the child’s life. The applicants only had limited interactions with the child and their relationship was thus subsidiary to the relationship the child enjoyed with his legal parents - a relationship deserving constitutional protection.

The application was therefore denied.

Having assisted with the comparative analysis aspects of the heads of argument, Hazarilall commented: ‘An analysis of the judgment itself shows that the court relied heavily on Professor Thaldar’s amicus submissions in coming to its final decision. Seeing all our work reflected in such a seminal judgment has definitely been the highlight of my legal studies.’

Shozi, who provided extensive research support on the regulatory scheme relating to assisted reproduction, said: ‘One rarely gets an opportunity to witness legal development first-hand, and it is even rarer to have an opportunity to be part of that development. It is deeply rewarding to know that our work helped shape this landmark judgment.’

* An amicus curiae is someone who is not a party to a case who assists a court by offering information, expertise or insight that has a bearing on the issues in the case (Wikipedia).