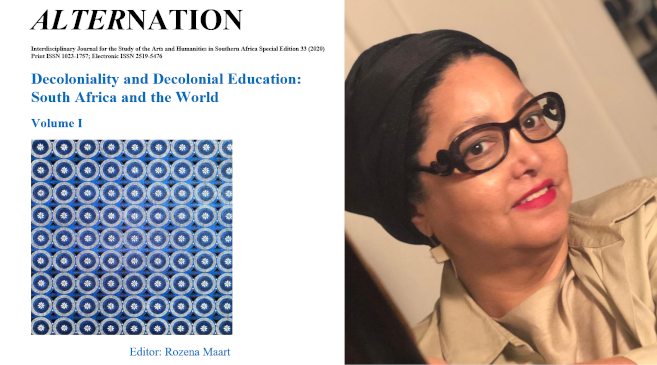 UKZN academic Professor Rozena Maart hosted an online symposium related to the feature - Decoloniality and Decolonial Education: South Africa and the World - she edited in the journal ALTERNATION.

Apart from South Africa, the contributors’ histories and agency as scholars and activists are from Bhutan, Brazil, Canada, Colombia, Germany, India, Ireland, Jamaica, Oman, Senegal, the United States and the United Kingdom.

As Maart notes in her editorial: ‘These are not just places where contributors were born or have lived and worked but places where our agency remains active, where we engage with the world, where we challenge the many ways in which colonisation continues to inform how we write, think, imagine, and produce knowledge.’

Referring to how the international Zoom launch was received, Maart said: ‘It is so unfortunate that we cannot go out to public spaces because of COVID-19 restrictions, to celebrate some of the UKZN students who took part in writing the collection. The students challenged our system of education with all of the coloniality the current structure has inherited and refuses to rid itself of, as well as the academic recipients of coloniality who speak of Africanisation yet reproduce the same power structure they claim to be against because they are the new colonisers who chastise, punish and belittle Black students’, said Maart.

Contributor, UKZN alumnus and architect Ms Nandipha Makhaye said: ‘Having dealt with the lack of transformation for many years and having to deal with all kinds of issues pertaining to my race and gender as an African woman who has taken her place in the previously White male-dominated industry of architecture, it was quite an awe-inspiring experience to be part of this platform. Being among world renowned academics and published authors, I was sure that my story was worth sharing with the world especially since this was my first published article.’

Another contributor, Mr Sayan Dey from Kolkata in India and now more recently a WITS University postdoctoral student, said: ‘The collection was a collective decolonial exercise of thinking, sharing, learning and healing where contributors from different corners of the world came together to share their experiences and background as many did at the UNISA Decolonial Summer School. We are scholars who also have histories, and these are not just behind our contributions but also inform our contributions.’

Mr Sieraaj Francis of the University of Cape Town, currently living in Oman, said: ‘Living, being, and doing decolonial work in colonial institutions and societies forces us to live, work and exist in the margins and in isolation. I am therefore very grateful to be part of this collective, to engage with and share with so many people doing decolonial work and to learn from all of them. It has been an inspiring experience to remember our ancestors, to meet each other and to remember we are not doing this work by ourselves and for ourselves.’

What stands out about the collection is that it brings together the work of renowned scholars, emerging and established scholars as well as students and former students whose contributions are indicative of the education they have received and that shows the colonial mindset they had to fight.

The collection also showcases the work of scholars whose students have borrowed from, some of which include critical race scholars, Black existentialist philosophers and decolonial thinkers, such as Lewis Gordon, Leonard Harris, Sabine Broeck, Jane Anna Gordon, Puleng Segalo, Sipho Singiswa, and others, many of whom have mentored, encouraged and supported them through the process.

Maart’s introduction puts forward the most important two-pronged question of the collection, one that South African scholars are grappling with: ‘What is decolonisation and what are we decolonising from?’ Her lengthy introduction of 30 pages also offers a short segment on South Africa’s history of colonisation which she asserts is ‘embedded in its history of enslavement much like on the rest of the African continent, as well as across the Americas, Asia, and particularly the Indian subcontinent, among others.’ Notable in the collection are contributions by Professor Leonard Harris, a founder member of Philosophy Born of Struggle and Black existentialist Professor Lewis Gordon, a founder member of the Caribbean Philosophical Association.

Political analyst and UKZN student Mr Jackie Shandu, who shares a contribution in the collection with three panellists in ‘Race, Race and the City’, said: ‘The collection bears witness to the historic and still ongoing collective commitment to total decolonisation - psychological, spiritual and material.

‘Among the many ground-breaking aspects of the collection, is its ability to draw readers into histories of colonisation and decolonisation across the world - including the classroom, the beach, language, identity, and enslavement - all with a focus on pedagogy, which foregrounds the relevance of buried histories of resistance that our ancestors pursued and for which they have not been credited enough.’

Gordon said this about our ancestors: ‘It is up to us to honour our ancestors through actions that assure they did not transition in vain.’