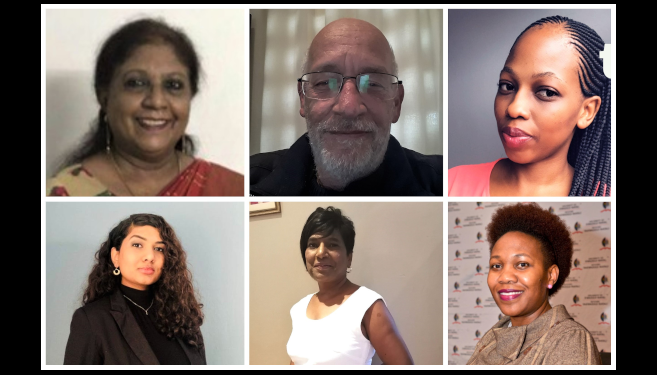 Curbing the Menace of Bullying Investigated During a UKZN Webinar

Curbing the Menace of Bullying - the Need of the Hour was the theme of a UKZN Corporate Relations Division webinar which aimed to get a better understanding of why and how bullying exists in communities, as well as to find ways to reduce the scourge.

Criminologist in the Department of Criminology and Forensic Studies, Professor Nirmala Gopal - who facilitated the event - said the ultimate goal had been to deal with the wide and broad issue of bullying while trying to unpack how bullying culminates in violence against women, noting the challenges the country faces in the area of gender-based violence.

Welcoming and introducing the panellists, Acting Director: University Relations Ms Hazel Langa said South Africa was going through a difficult time with the political unrest in KwaZulu-Natal and the rise in the number of COVID-19 cases leading to the announcement of the extension of the Level 4 lockdown. Despite these challenges, communities were still faced with the menace of bullying which is why the University prioritised the topic in order to curb the scourge.

Panellists included a UKZN student and motivational speaker Ms Cleola Govender, who presented on Understanding the Narrative of Bullying; an Emeritus Professor of Criminology from India Dr Beulah Shekhar, whose topic examined the Victims of Bullying in a Global Community - the Issues and Challenges; a clinical psychologist and professor in Psychology at UKZN Professor Steven Collings, who investigated the Social Psychology of Bullying Perpetration; and lecturer in the Discipline of Criminology and Forensics at UKZN, Dr Nomakhosi Sibisi, who spoke on the Effects of School Violence on Educators: A Case of a Selected Secondary School in KwaZulu-Natal.

Shekhar said according to 2018 statistics from UNESCO, a third of the global youth were bullied in school, highlighting that boys experienced slightly higher rates of bullying than girls, while in countries where bullying was more pervasive, girls were more vulnerable. She said a low socioeconomic status was the main predictor of whether young teens in wealthy countries were bullied, while immigrant youth in wealthy countries were more likely to experience bullying. She highlighted contributing factors and relationships between victims and victimisers, adding it was necessary to teach and deal with both groups, and expanded on the types of discipline from preventive, to supportive and corrective.

Sibisi examined the nature and extent of school violence in the South African context with a special attention to the types of bullying in South African schools and the effects of bullying on teachers and learners. She said schools were part of the communities they were situated in and sometimes the violence and bullying were a result of the problems that existed within that society. She recommended that parents play a role in curbing school violence by getting involved and helping schools fight the menace.

He referred to a recent case of a Grade 10 pupil in the Limpopo province who committed suicide after being beaten outside her school.

Collings said the causes and consequences needed to be considered at a variety of system levels with interventions targeting all relevant systems levels.

Sharing her ordeal on how she was bullied from the age of eight, Govender said suffering such abuse at a young age was hard because it took place during a person’s foundation stage in life, but highlighted that she managed to overcome the challenges.

Through her book titled: Birthmark, my Story, she aims to be a voice for the voiceless.