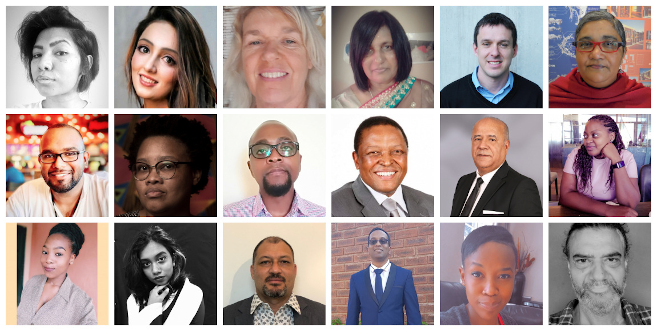 The College of Humanities hosted a virtual colloquium on Critical Perspectives: Hidden Voices. The colloquium was part of the Unsettling Paradigms - the Decolonial Turn in the Humanities Curriculum in South Africa pilot project.

The project is headed by its Principal Investigator Dr Yashaen Luckan, of the School of Built Environment and Development Studies, who was awarded an Andrew W Mellon Foundation grant.

‘This colloquium is a radical break from academic norms that express only the voices of the privileged. It is alternatively focused on listening, observing and recording the voices of the oppressed and deprived through real-life experiences,’ explained Luckan.

These persons/communities comprise disadvantaged practitioners who were excluded during apartheid; activists and support groups; students who could not continue studies due to socio-economic challenges and barriers for re-entry into academia, and practitioners who face pedagogic barriers and exclusion of practice-based knowledge.

The colloquium was divided into three voice segments of practitioners, students and professional communities.

Speaking from the practitioner perspective South African Institute of Architects (SAIA) Transformation Chair Ms Karuni Naidoo looked at her experience in architecture as a series of layers, within an “intersectional” approach while Group Managing Director at Osmond Lange + Ikemeleng Architects Mr Jonathan Manning unpacked the barriers to entry and progression within the Architectural profession for Black people and women.

‘The legacy of our colonial and segregationist past is an array of very current and ever-present disadvantages that continue to negatively impact on the ambitions, livelihoods and quality of life of the vast majority of Black people living in South Africa, a burden that is further amplified for Black women,’ he adds. Postgraduate student/practitioner Mr Shervin Kuppan ruminated on his work experiences, his desire to grow his knowledge and skills through self-learning, project participation, endeavours for technical and detailing excellence and self-sacrifice. Another student/practitioner Mr Rowen Ruiters looked at the struggle for advancement in the profession, experience as a practitioner and employment.

Focusing on the Voices of Students, Ms Parishka Pillay critiques the architectural education and profession as a whole from the female South African Indian perspective; Ms Nokubonga Madondo questioned how pedagogy celebrates the uniqueness in individualism, encourages identity and culture and levels the ground in the built environment? Ms Shiluba Maluleke looked at Ethnic and Racial disparities in Education, Ms Azraa Saleh reflected on A Young Woman’s Story of Struggle to Study in an Orthodox Social/Cultural System. Ms Luthando Ngema addressed resisting erasure through claiming epistemic inclusion and the continued catastrophic Black experience within the university while Mr Kerolin Govender addressed a Cross-cultural Artistic Collaboration as a Reflective Journey towards Decolonised Thinking.

Under Voices of Professional Communities, Architectural Practitioner Ms Ndu Mngomezulu Nene expressed the real impact of entrenched systems and the severity thereof on architectural professionals, what it has actually taken away from them, and suggests the ideal for the future.

President of the South African Institute of Draughting (SAID) Mr Mohammed Mohideen focused on Architecture and Injustice; Vice President of South African Institute of Building Designers (SAIBD) Mr Videsh Boodu spoke to the restrictive legislation regarding the recognition of professional competence within the architectural profession that inhibits the growth of the profession and its professionals. He says, ‘The ruler to measure competence appears to be broken and a new metric to define competence would need to be created in order to overcome the hurdles that have been in place for decades.’ While SAIBD President Mr Luvuko Mqaqa looked at Architecture Studies and practice in the Eastern Cape.