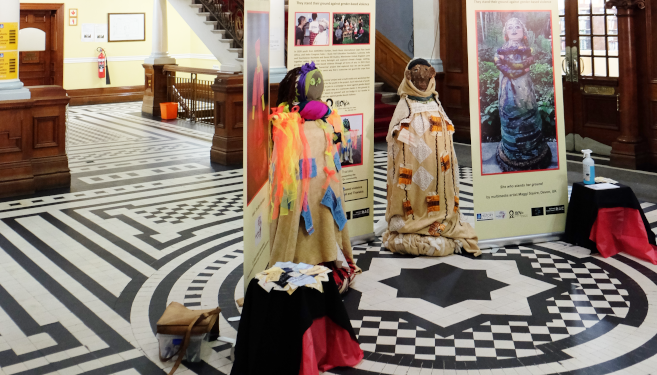 A campaign titled: They Stand Their Ground Against Gender-Based Violence (GBV) has culminated in an exhibit at the Durban City Hall funded by the National Arts Council.

UKZN’s Centre for Communication, Media and Society (CCMS) within the School of Applied Human Sciences, partnered with Art: A Resource for Reconciliation Over the World, South Africa (ARROWSA) to organise the campaign and exhibit.

The exhibit, which promotes individuals standing their ground against gender-based violence, includes models of people named Deli and Thanaka made from recycled materials. The models were created by the youth from ARROWSA Bechet with banners made by South Roots International and Maggi Squire of Indra Congress.

This project involved youth from South Africa, India and the United Kingdom taking a stand against GBV, with input from young women such as Ms Ayanda Ngcobo of the Durban Local History Museum and CCMS masters student Ms Luyanda Makoba-Hadebe.

In light of Pride Month, Thanaka was also created to represent the lesbian, gay, bisexual, transgender and queer (LGBTQ+) community.

The exhibition is interactive and allows visitors to attach words of support that are available to Deli (who represents the domestic space) and Thanaka. It also coincides with National Youth Month where the youth are encouraged to come up with creative and innovative ways of improving their skills, and communicating their views, stance, vision and leadership.

CCMS honorary lecturer and ARROWSA Chair Dr Mary Lange said: ‘This project grew far beyond our expectations, starting a chain of similar installations across the globe with our partners. We are in talks with one of our UK partners Touchstones Rochdale about a version of this installation going to the UK later in the year. We believe we need to stand together as a community to chip away at the devastating daily numbers of gender-based violence victims. This is a community-driven stand, and this community knows no culture and no borders.’

Said Ms Mohau Qalaza of the Durban Local History Museum: ‘What particularly impressed me the most about this campaign, is the inclusion of the youth who painstakingly molded and bought Thanaka and Deli into the striking and beautiful personas they are. Their message against GBV including LGBTQ+ is clear and strong and it is refreshing to hear their views regarding unfortunate acts against humanity.’

ARROWSA Bechet coordinator Mr Bheki Dlamini commented: ‘Boys and men are also being abused and of course that is the topic that communities don’t touch or are not very vocal about - I suppose it is also because society has dictated that men should be strong, men don’t cry. So, we wanted to bring out that there are men from the LGBTQ+ community who go through this abuse. It was important to acknowledge that we see you, we stand with you and we support you.’

ARROWSA Bechet participant Ms Casey Spinner said: ‘Seeing it here in the City Hall I am trying hard not to scream! It is so good to see that our work paid off and that it has been placed in such a big place and I am glad we took up the challenge.’