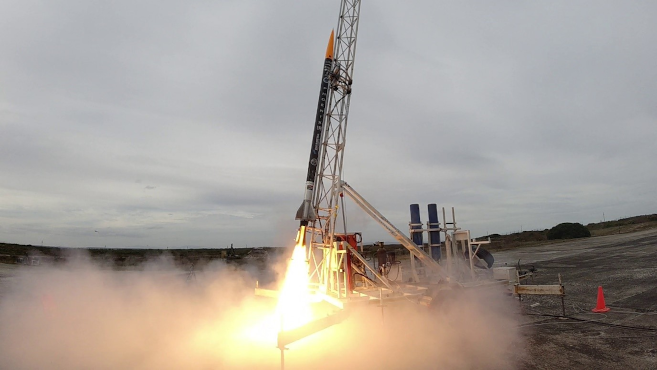 UKZN is at the forefront of research into space propulsion technologies in Africa.

The campaign, run over several weeks at the Denel Overberg Test Range in the Western Cape, resulted in the student-driven team breaking the African hybrid rocket altitude record.

The new record-breaking mark is 17.9 km, achieved with a Phoenix-1B Mk IIr vehicle. The Mk IIr rocket has state-of-the-art components, including a carbon fibre propellant tank and silica-phenolic/graphite nozzle.

A second rocket, the Mk I, was also launched during the campaign and reached an altitude of 11.1 km, also breaking the previous African record of around 10 km.

ASReG’s 2021 flight test campaign was highly successful, validating the design and modelling work carried out by postgraduate students and providing over 20 UKZN students and staff with invaluable experience in a world-class flight test environment.

The official campaign video, produced by Mr Donald Fitzgerald - a graduate and former student of ASReG’s space propulsion research programme - incorporates footage from multiple cameras strategically positioned during the flight tests of both rockets, including aerial footage supplied by drone pilot Richard Matchett. The Denel Overberg Test Range also provided high-speed camera footage on the launch pad and imagery from their state-of-the-art cinetheodolite tracking cameras, which followed both rockets throughout their sub-orbital flights.

Both hybrid rockets carried telemetry systems developed by ASReG’s industrial partner, DIY Electronics, and these were able to capture a high-altitude video that was beamed back to receivers on the ground.

The 11-minute-long film captured the excitement of the launches themselves and some of the unseen background work that goes into a rocket campaign.

ASReG’s research is focused on space propulsion technologies but in addition to the Phoenix rocket work, the group is also pursuing the development of an indigenous satellite launch capability. The programme is funded mainly by the Department of Science and Innovation, with industry support provided by local companies including Rheinmetall Denel Munition, DIY Electronics, Petrawell, AC Industries, Swagelok and Hulamin.