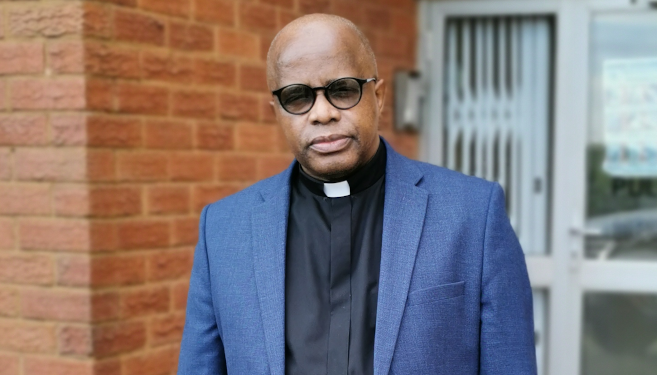 UKZN Alumnus Installed as Bishop of the Anglican Diocese of Zululand

‘Never in my wildest dreams did I imagine I would become Bishop of the Anglican Diocese of Zululand. I had always thought of myself as a parish priest, but I guess God had other plans,’ said UKZN alumnus Bishop Vikinduku Mnculwane.

Growing up in Escourt in KwaZulu-Natal, Mnculwane was involved with the church from a young age and in 1987 responded to the calling and entered a seminary in the Eastern Cape to be trained as a priest.

He obtained a Master of Theology Degree in Systematics at the then University of Natal in 2003 and a Doctor of Administration Degree in 2016. Reminiscing on his student days, Mnculwane said: ‘The kind of supervision I received from my supervisor has remained deeply etched in my memory. I enjoyed the one-on-one sessions we had and being introduced to other ways of conducting research which were not necessarily hypothesis-driven.’

Mnculwane has occupied a variety of leadership positions including Director for the Heritage Unit in the KwaZulu-Natal Office of the Premier; and the Acting Chief Executive Officer of Amafa AkwaZulu-Natal, now known as the KZN Amafa and Research Institute.

He was serving as the Rector of the St Augustine’s parish in Umlazi, Durban, when he was elected Bishop of the Anglican Diocese of Zululand which serves 283 congregations in rural areas such as Eshowe, Empangeni, KwaNongoma, Vryheid and Nquthu, ministered to by 47 clergy, 16 priests and four deacons.

As the chief pastor Mnculwane’s role includes proclaiming and teaching the Gospel, as well as upholding a sound doctrine.

Asked about his vision for the Diocese, he said: ‘As a leader you create a vision together with the people you lead.’

He says the church has had to learn to adapt to challenges caused by the COVID-19 pandemic by finding new ways of surviving - including through live streaming.

Mnculwane thanked those who had chosen him for the demanding role, paying tribute to the St Augustine’s parish and its community for teaching him so many things. ‘Truly I am blessed and privileged!’