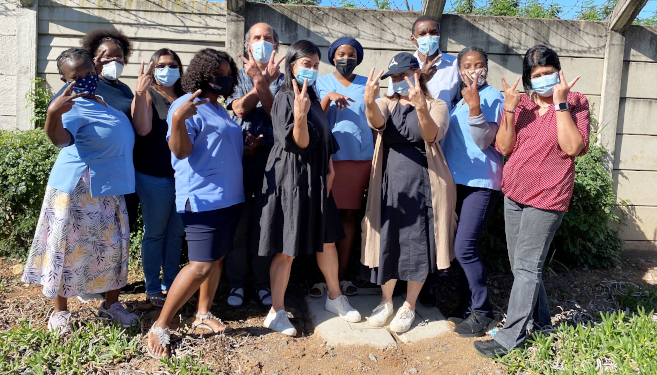 The FRESH (Females Rising through Education, Support and Health) clinical research team gives the ‘V’ for victory sign for Lactin-V on launch day.

Could Common Bacteria Protect Women in SA Against HIV?

UKZN scientists are members of an international team doing research into whether the common bacteria, Lactobacillus can protect women in South Africa against HIV.

The innovative study, launched in Umlazi, Durban, also involves researchers from the Aurum Institute based in Johannesburg, the University of California in San Francisco (UCSF), and the Ragon Institute of MGH, MIT and Harvard in the United States.

The treatment, Lactin-V, is derived from a strain of bacteria known as Lactobacillus that is naturally abundant in women who have low levels of vaginal inflammation which is associated with decreased HIV risk. Prior studies in South Africa have shown that women who have a deficiency of Lactobacillus have higher levels of vaginal inflammation and up to 3- to 4-fold higher risk of HIV infection.

Researchers aim to discover whether treatment with Lactin-V, which was developed by Osel, Inc. in Mountain View, California; can protect women from HIV by altering the composition of the vaginal microbiome to one associated with lower inflammation in the vaginal tract.

This first-in-Africa trial seeks to enrol 60 healthy young women aged between 18 and 23, each receiving 11 doses of Lactin-V over the course of four weeks. Lactin-V has already been tested in 228 women in the United States and shown to be safe.

Said Professor Thumbi Ndung’u, Scientific Director of the HIV Pathogenesis Programme (HPP) at UKZN and a co-principal investigator of the Lactin-V study: ‘There is a pressing need for new HIV prevention and cure strategies that are effective in our setting but also acceptable and easy to access by young women who are disproportionately affected by HIV. Launching this clinical trial is an important milestone. We’ve made great progress toward understanding how HIV is transmitted and causes disease on a molecular level and can now translate that knowledge into new interventions that may benefit the community and accelerate the goal of AIDS elimination.’

Lactin-V, can be stored at room temperature and is designed to be user-friendly, delivered in an applicator inserted like a tampon, which can be easily incorporated into women’s daily routine. The first participant, a 22-year-old Umlazi resident, said: ‘I’m happy to be a part of the Lactin-V study. When the opportunity for us to learn about what’s going on in our bodies arises, why not take it?’ After receiving her first dose at the clinic she said: ‘It was easy. I am sure I can do this. No problem!’

‘If Lactin-V can lower the risk of HIV infection without requiring young women to alter their behaviour, it could be a game-changer,’ said Dr Krista Dong, clinical director of the FRESH (Females Rising through Education, Support and Health) research site where the trial is being conducted and an investigator from the Ragon Institute.

‘Umlazi is my community so I welcome this study that aims to help our daughters and grand-daughters avoid HIV infection,’ said the Rev Lucky Mngomezulu, who is a member of the community advisory board that provides oversite for HPP initiatives such as the Lactin-V trial. ‘I am grateful to see that scientists in South Africa and around the world are thinking of us.’