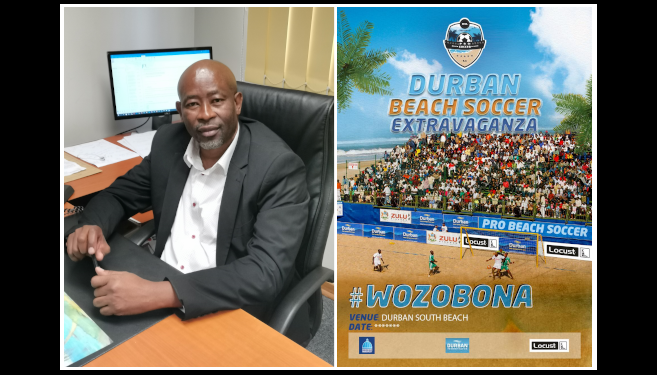 UKZN’s Mr Zwelithethindaba Sapula who is bringing pro beach soccer to the province.

The Pro Beach Soccer League, set to kick off in September, will be played on eThekwini’s South Beach as a two-round league. ‘The league was approved by the mother controlling body for football in the province, KZN SAFA. At the start it will be played in KZN only, later being taken to other coastal regions and provinces,’ said Sapula.

Sapula, who is the Senior Sports Officer on the Edgewood campus, said the league had been established to ‘give hope to the youth and everyone who has a love and passion for sport, especially at the beach.’

Sapula said the project was sustainable as the infrastructure costs were low and South Africans loved soccer! ‘It is easy to have infrastructure as you only need vacant land, sand and goal posts. You don’t need expensive soccer boots - you play beach soccer bare foot. There’s no age restriction, you only need to be fit,’ he said.

He is confident a national team will be formed in South Africa to compete in Afcon qualifiers as well as in competitions globally. ‘The development will ensure players have an option to become professional in a sport they love and can play. It will improve infrastructure and capacitate personnel, including qualified coaches and administrators as they will be trained to work globally.’

Sapula plans to involve the youth from townships in the pro beach soccer developmental league. ‘The youth are our future and if they are not part of new things, the country will stay the same and will take time to catch up with the world. This sport will keep the youth occupied and help reduce the number of youngsters who get involved in substance and alcohol abuse. My hope is that it will keep them engaged and fit with a goal to becoming professional.’

Entertainment and tourism will be linked to the game, which may attract sponsors to grow and sustain the sport. ‘TV coverage is great because people love this sport and it will have a different level of content,’ he said. ‘Sponsors will find space to market their products in a new sport which will be like a breath of fresh air after the pandemic.’

Manager: Student Health and Sport at UKZN Mr Mark Bashe congratulated Sapula and wished the sport well as it grew and developed in SA. ‘Our Department is thrilled to have Zweli leading beach soccer in our country - he has the passion, knowledge and the expertise in football and will hopefully guide this fairly new code to greater heights. Zweli is the driving force behind our UKZN football strategy which saw our men’s team win the USSA National Championships in 2018. We wish him and his team lots of success in driving this new strategy for beach soccer in South Africa,’ said Bashe.

Sapula thanked the leadership of SAFA nationally, the association’s KZN leadership, the eThekwini Municipality for the ‘vision and understanding what we want to do for the nation and KZN. We also would like to thank the KZN Department of Sport and Recreation who saw the opportunity for sport development.

Currently reading for his PhD in sports leadership in KZN, Sapula said: ‘I love sport with all my heart. I live it.’